Every state and region in the United States has food they are famous for. In Maryland, you are seriously messing up if you don’t eat these at least once. And, while it is not a famous regional food, the Cuban restaurant in Frederick was one of my favorite places to eat when I was there. So, here is my short list of what to eat in Maryland.

Whether you eat them steamed, fried, made into cakes or soup, or in dip, you simply must have some Maryland Blue Crab if you go to Maryland. Buy them by the dozen in seafood shops, or catch them in the waters of the Chesapeake Bay. Wherever you get them, though, season them with Old Bay Seasoning. Blue Crab is the State Food of Maryland! 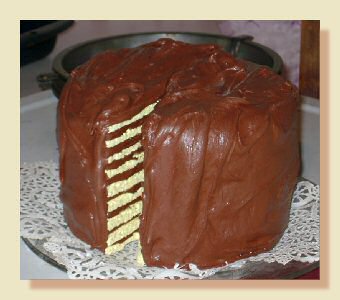 This is a cake with ten layers. It comes in many different flavors, and is the State Dessert of Maryland. It is served with whipped cream and strawberries.  “October 1, 2008, the Smith Island Cake became the State Dessert of Maryland (Chapters 164 & 165, Acts of 2008; Code General Provisions Article, sec. 7-313). Traditionally, the cake consists of eight to ten layers of yellow cake with chocolate frosting between each layer and slathered over the whole. However, many variations have evolved, both in the flavors for frosting and the cake itself.” (from http://msa.maryland.gov/msa/mdmanual/01glance/symbols/html/dessert.html)

My favorite candy ever, these caramels have a creamy center. They look like a bulls eye. Made by the Goetze’s Candy Company in Maryland, they are so chewy and delicious. Goetze’s also makes Cow Tails.

Located in Frederick, Maryland at 9 East Patrick Street, Sabor de Cuba was an interesting stop while we were in town. The Cubano Sandwich, the Maduros, and the espresso were the top three things I would recommend. Check out their menu here. It’s what to eat in Maryland.

Today we got up very early (for us). I started a pot of bean soup with ham in the crock pot, the we drove down to Washington, D.C. to the VA Medical Center so Jim could get the stitches taken out of his face. It was very crowded in the parking lot, so I had to let him out and circle around about three times waiting for someone to pull out of a space so I could park. I got very lucky because two cars pulled out in side by side spaces. If you have never had to park a pick-up truck with an crew cab, you really won’t appreciate that, but anyway, I got parked finally and went upstairs to the third floor.

They had already taken Jim in to an exam room, so by the time I found him, they were just starting to pluck those babies out. And since I was not there when she introduced herself, I don’t know what her name was, but it was the same doctor we saw the first time when they did the biopsy. As she was taking the stitches out she was explaining to Jim that although this cancer was not CAUSED by smoking, smoking aggravates it and can make it worse. She advised him quite strongly to quit, and I agree with her. She told him he has to go every 2 months for a year to be examined by a dermatologist, so we made an appointment with the one in Atlanta for December.

We had already decided to stop for lunch in Frederick, Maryland on the way home because we have been wanting to go to a place we have passed on several occasions called “That Cuban Place”. Man, I wish we had stopped in there before now! After eating lunch there today we made a mental note to go there at least one more time before we leave Pennsylvania next month.

Jim ordered a Cuban sandwich, which looked very delicious, and it must have been because he ate every bite, and looked like he wanted to lick the plate. He had eaten a cuban sandwich at a place in Florida several years ago, but he said that must have been a cheap imitation because he doesn’t remember it being as tasty as the one he had today.

I had the Tilapia. It was sauteed in olive oil with peppers and tomatoes, and served up with rice, beans, and fried plaintains. Oh, oh, oh, those plaintains were scrumptious, or Muy Bien’! The owner offered us a free expresso at the end of our meal, which Jim accepted, but not me because I don’t like it.

After lunch we went over to Borders Books because I had a couple of gift cards to spend. I got a new cookbook called The No-Gluten Cookbook and an Arizona Highways magazine. I haven’t looked at either one yet. So, that was our Tuesday, how was yours?

Oh, I almost forgot, I made another batch of soap yesterday. This one has Clary Sage essential oil and some cinnamon powder for scent. I haven’t cut it yet, but I smelled it this morning and it was devine!

So, now for dinner we’ll be having that bean soup with some cornbread. It is smelling really good right now.

Another week, another day off, and Jim and I were driving through the countryside again looking for scenic wonderment. I am here to tell you we found it, just a few miles down the road in Maryland. Before we came up here to work, we never knew Pennsylvania and Maryland could be so beautiful. Everywhere you go around here your eyes are rewarded with beautiful sights, and today was no exception. The first place we went was to a little restaurant on Hwy 16 in Fairfield, Pennsylvania called Our Place Cafe. They have not been open long. Today was the second time we ate there, but we both had the same thing that we had the last time. Jim got a cheesesteak sandwich and I got Crab Fries. Crab Fries are french fried potatoes with crab meat, bacon, and cheeses on top. They serve it with a yummy scrummy sauce that has Old Bay seasoning and horseradish in it. OMG! I am going to be making these at home sometime soon!

After we left there, we took the first left turn off of Hwy 16, just because we had never been down that road. It turned out to be a dead end road, but here is a picture I took along that road: After we got back to the main hwy, we took another left turn where there was a sign pointing to a roadside market. The market we found at the direction of that sign was fabulous. The farmer guy was out in the front watering a trailer loaded with fall mums for sale: Inside the market we found so many choices it was hard to choose, but we wound up buying eggplant, green beans, two ears of silver king corn, a tiny little cantaloupe that was about the size of a large softball, but it smelled soooo good. Back at home, I made eggplant parmesean, steamed green beans, and fresh corn on the cobb in the microwave. I cut up the little cantaloupe, and that was dinner.

Here is the recipe I used for the Eggplant Parm:

Peel the eggplants and slice 3/4 inch thick. Salt generously and let set for about 20 minutes, then rinse well. Put the egg and milk into a bowl and mix well. Put the flours, salt and pepper into another bowl and mix well. Dip the eggplant slices into the egg mixture, then into the flour mixture, coating well. Fry in olive oil in a skillet until browned. Place the fried eggplant slices in a casserole dish in one layer. Pour the spaghetti sauce over, then sprinkle the cheese over. Bake in a 425 degree oven for 20 minutes. Let sit for at least 5 minutes before serving.

This is sooo good served with steamed green beans and corn on the cob. It is gluten free. If you are allergic to eggs, you can leave them out and just use the milk. Sorry, we were too hungry to take pictures of it before we ate it all up!