We usually don’t travel at night. If we leave home to go somewhere, it is usually early in the morning. So, when we decided to go on a road trip to Mesquite, Nevada on Friday after work, we knew we would be doing part of the driving for that trip in the late evening and after dark. 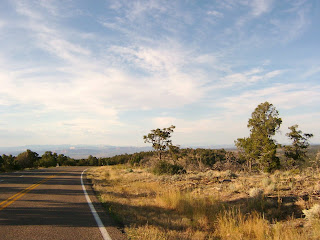 You can tell from the long shadows that the day was ending. We have never seen the desert of Northern Arizona and Southern Utah in this light before. 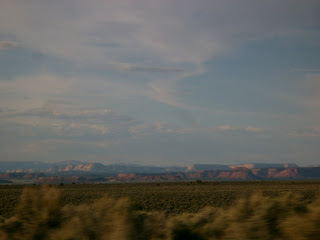 I love the bigness of the sky out here. It seems like you can see for a hundred miles.  This is looking east towards the Vermillion Cliffs. It is another place where I just can’t see it enough. 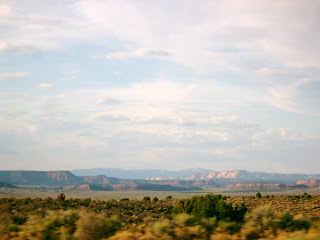 This was taken on Arizona Hwy 89A going north towards Fredonia, Arizona. It is a pretty good photo, but it still does not capture all the color that was there on Friday afternoon. 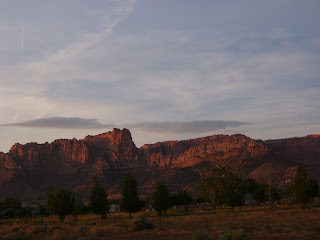 Along about sunset, we were driving through Colorado City, Arizona.  Colorado City is a fundamentalist Mormon settlement just to the east of the Utah border.  The colors of the cliffs at sunset are gorgeous! 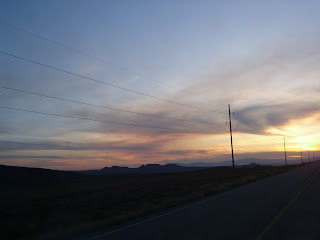 That sunset was awesome! Like I said, the sky just seems bigger out here. 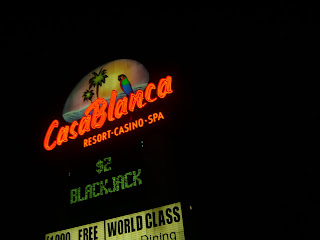 Our destination for the weekend was the Casa Blanca Casino. We stayed two nights, and had a fun time. Besides the obvious reason for going, the restaurant there was really good, and really cheap. Can you believe a 16 oz porterhouse steak, baked potato, salad, and steamed green beans for $10.99? Or a humongous fresh fruit platter with cantaloupe, honeydew melon, strawberries, grapes, pineapple, and cottage cheese, for $6.99? So much that I could not eat it all.
But OMG! Did you know it was over 110 degrees in Nevada yesterday???  I’m just glad we didn’t have to go outside for anything.

On our last days off we decided to go to Mesquite, Nevada to spend the night. The main reason we decided to spend the night is because FabGrandpa had an appointment with a chiropractor in St. George at 9:30 a.m, and that is 125 miles from our trailer. The reason we went to Mesquite is because the Oasis Casino there only charges $32 per night for a room and they give you $10 for gas and $5 for playing the games. What a deal!

It was a beautiful day: So, off we went . We had to drive through the Virgin River Gorge between St. George, Utah and Mesquite. It is difficult to describe this area. There are huge rock mountains on both sides of the interstate, so big that they dwarf semi’s on the road. But even that does not convey the enormity of it.

If you look at the picture below, you will see the curve in the road, and the semi trucks on the other side, but it still does not show the 6 and 7 percent grades, the winding curves, the sheer drops off the side of the road into the gorge below, and the Virgin River winding through the bottom of it all. It is so spectacular, that I wonder sometimes why people even bother to come to the Grand Canyon after they have driven through this gorge for free. (well, almost, I would still come here…). We arrived at the Oasis around 4:30 p.m., checked in, took our luggage to the room, and went straight to the casino. I sat down at one penny slot machine and played it for four and a half hours on the free $5.00 they gave me. I was up to about $85 at one point, but you know me, I don’t know when to say when, so when I finally walked away from there I was broke, but I still had fun. We got up early the next morning. The sky was overcast again, outside of the casino, and it did make it look like an Oasis: We drove over to Dr. Allen’s office in St. George, well, really in Washington City, which is right next door to St. George, to the east. The office was about one block off the main drag of Telegraph Road. I dropped FabGrandpa off and went to find a place to park. When I came into the room, Dr. Allen had FabGrandpa standing behind a screen of sorts that measured how much he was out of alignment. (I love that term, ‘out of alignment’, it makes me think that his tires are wobbling…) This episode all started because the light bulb blew out in the vent hood over my stove. I need plenty of light to be able to see to cook, so I nagged him long enough until he finally was bent over sideways trying to figure out where to put the new light in. Next thing I know he can barely walk, so off we go on this chiro adventure. After FabGrandpa was measured and the problem determined, he was taken to the torture chamber, I mean other room down the hall, where Dr. Allen commenced the adjustment procedure. He didn’t exactly crack the bones, but he punched and probed, and used a little instrument all over his back and hips, and pretty soon it was all over. FabGrandpa had a couple of days of soreness and discomfort, but now he is back to his old self, good as new. Thank you, Dr. Allen, you did a great job! Oh, and if you all need a chiropractor while you are in this area, you really should give him a call, he is a very nice guy and a good sport, putting up with me taking pictures and asking tons of questions while I was there.