Fabgrandpa and I don’t celebrate Christmas in the traditional, spend all the money in the bank on useless gifts way. We DO send a small gift to each of our children and grandchildren, we just don’t buy gifts for each other. It is just not what we do. We feel blessed that we have reasonably good health (OK, I have plantar fasciitis, diabetes, and high blood pressure; and he has had oral cancer and has COPD, but we DO ok with our health), and that we have “enough”.And believe me when I say, I know what it is like to not have it.

In the course of my day today, I read about Kathryn and Bill. They live in Texas near a friend of mine, who is good friends with them. They have been married for 35 years, and raised six children together who gave them 21 grandchildren. In March of 2009, Kathryn followed her lifelong dream and opened up children’s boutique and consignment shop in Katy, Texas called The Children’s Carousel. In November, 2009, they received custody of six of their grandchildren. As a grandmother myself, I can see where that would change their life immensely! Taking care of children is a chore best fit for the young–being a grandparent parenting six grandchildren would be not just emotionally and physically exhausting, but financially draining as well.

In July 2011, Bill felt a sharp pain in his neck and developed a blood spot in his eye. This turn of events landed him in the hospital to have what they expected to be a simple stint proceedure, but actually turned out to be open heart surgery. After he surgery, Bill woke up to kidney problems and the realization that he was blind in both eyes, due to complications from the surgery.

He was moved to an assisted care facility, then home. He needs around the clock are that no one in the family is able to provide for him. Kathryn has tried to remain strong through this ordeal, but the realization set in that Bill is no longer able to see and can never work again.  Now the legal guardians of only three of their grandchildren, they are the sole providers for them, and have the other three most of the time as well.

The events of the past several months  have been hard enough to digest. Add to that the fact that their house is being sold in a short sale and they are forced to find somewhere else to live. As if that wasn’t enough, Kathryn fell on a makeshift fence at The Rice Harvest Festival and broke several teeth and is in constant pain.

I am asking you, my readers, to think about what you would do in any one of these circumstances, and try to find it in your heart to be a Christmas Angel for Bill and Kathryn and their grandchildren. You can make a cash donation via paypal, by using my email address, fabgrandma@gmail.com, or email me for the email address of their friend, Lisa, who can give you a mailing address if you want to send clothing, food, or toys,  gifts other than money. If you send a paypal donation, please put Kathryn and Bill in the subject line. I will certainly make sure it gets to them. I only wish I could do more for them, or that I lived nearby so that I could lend a hand in some way. At the very least, if you could share this post with your friends and family, tweet it or share it on Facebook, I would very much appreciate it. Thank you. May the spirit of Christmas fill your heart tonight.

Last week Rob and Belinda (the other camphost couple here at Payne Lake) and FabGrandpa and I went over to the shooting range on the other side of the county for a clean up day. This shooting range is on Forest Service property, and has no use fee. People can just go there and shoot at targets.

Joe, the resource manager was there too, so there were a total of five of us working. We picked up FOUR truckloads of trash from this property, that was maybe 1.5 to 2 acres in size. Joe said the last time they had a clean up day there was two months ago. Now, I know that this place is probably used mostly by hunters, but what does this say about the people who live in this area? I just don’t understand why they feel like they can just trash the place. It is public land, and belongs to all of us. Shouldn’t we ALL do our best to keep it clean?

The forest service has temporarily closed the campground where we are volunteering while they do a timber harvest in the area. It was done for the safety of the public, who may not realize the loggers will be in there. What this means is that every time I go somewhere, whether it is to go to the entrance kiosk to perform my volunteer duties or to the grocery store, I have to move that gate.

I know you can’t tell by looking at it, but that thing weighs about 50 pounds! It is making my back hurt moving it. Today I have to move it six times! And every time I do, I feel like this: 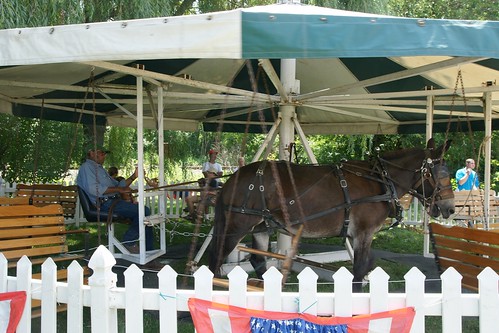 I hope they get this timber harvest finished real soon!

My online friend, Sally, donated two of her cutie cute handmade aprons for the cause!  This one is green and blue, and oh! so cute:

Sally makes these aprons, and I think they are just soooo cute! And because it is reversible, you get two looks in one:

And here is a pic of the blue/green print to give you a better idea of how it looks:

Bidding starts today and ends on 1/31/2011. I am starting the bid for this item at $10.  All proceeds from this auction are being donated to The Oral Cancer Foundation, a national public service, non-profit entity designed to reduce suffering and save lives through prevention, education, research, advocacy, and patient support activities. To make a bid, just leave a comment here with a dollar amount that you wish to bid. The auction winner is responsible for paying shipping from Washinton zip code 98223.

This auction will close on Monday, January 31, 2011 at 11:59 p.m. Central Standard Time. The highest bidder will win. The winner will be responsible for paying postage to ship the item. If you have any questions about this item, email me at fabgrandma @ gmail.com

If you’d like to spread the word about this auction to benefit The Oral Cancer Foundation, and to help educate people about oral cancer, please tweet about it, post about it on Facebook, or write about it on your blog. I’d really appreciate it! and you could be saving someone’s life!

I guess you noticed the 12 up there, instead of 10 in the 10 For 10 auction. That’s because FabGrandpa and I have some of the best friends you could ever meet!  One of them, Gaelyn from Geogypsy, has generously donated a pair of sterling silver and turquoise earvines for me to offer at auction in my benefit for The Oral Cancer Foundation.

Gaelyn makes these earvines. I have seen them in person and they are really beautiful and unique. They allow someone with one hole pierced ears to look as if they have multiple piercings. Here is how she describes them:

“Ear Vines bend to follow the curve of the ear. They only require one pierced hole. Insert unbeaded wire from front to back
and pull down like a dangle earring. Swing up with ear between wires, align as desired and give a little pinch”

These beautiful sterling silver and turquoise earvines normally sell for $20 a pair.  All proceeds from this auction are being donated to The Oral Cancer Foundation, a national public service, non-profit entity designed to reduce suffering and save lives through prevention, education, research, advocacy, and patient support activities. To make a bid, just leave a comment here with a dollar amount that you wish to bid. The auction winner is responsible for paying shipping from Arizona zip code 85362.

This auction will close on Monday, January 31, 2011 at 11:59 p.m. Central Standard Time. The highest bidder will win. The winner will be responsible for paying postage to ship the item. If you have any questions about this item, email me at fabgrandma @ gmail.com

If you’d like to spread the word about this auction to benefit The Oral Cancer Foundation, and to help educate people about oral cancer, please tweet about it, post about it on Facebook, or write about it on your blog. I’d really appreciate it! and you could be saving someone’s life!

Just wanted to let you all know I received another donation to add to the pot! Christie sent me $5.00 by paypal! Thank you so much, Christie! This brings the total to $284.29. Yay, I am over half way to my goal!

Don’t forget, I am still taking your spare change donations, just click on that “Donate” button over in the right side bar to send me the spare change in your Paypal account. And by the way, have you been screened yet? This is a benefit for The Oral Cancer Foundation.

To learn more about this auction and spare change fundraiser, read here.

Eric is the winner of a CD of my family’s recipes. He bid an amazing $25 for it. Thank you so much, Eric. I know you’re going to love these! This brings the total raised for The Oral Cancer Foundation to $248.29.  We’re getting closer to the goal!

Many thanks go to Alice, who sent me a bid of $20 for the 3 Gluten Free Cookbooks that I had up for bids in my auction to benefit The Oral Cancer Foundation. Now I can get those sent out the door, and her generous bid brought me closer to meeting my lofty goal of $500!  This bid, plus a donation of spare change from a paypal account, brings the total to $218.29!  Whooo Hoooo!

Now there is only one item left that has no bids, the Art Greeting Cards. Any takers on those?