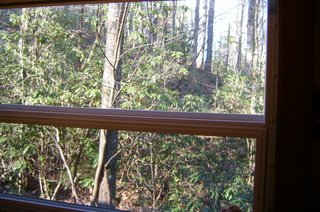 The View from my Window.

It is hard to believe that we have been here at Unicoi for a month now. When we left Virginia, I was looking forward to having some time to get some things done. I wanted to finish Becky’s quilt and start quilting Rebecca’s, but I have not had time to put even one stitch in either one of them. I wanted to go to Jim’s mothers and have her give me some more lessons on wire-wrap jewelry making. I wanted to be able to take some photos every day. So far, I haven’t accomplished any of that. I’m beginning to think that we need to go back to Virginia so we can rest a bit.

Let’s see, in the last month there was Thanksgiving, Jim’s Dad in the hospital, the trip to Douglasville to get haircuts and visit my Mom and our daughters, buying the new trailer, moving from the old one to the new one, going to Gainesville for eyeglasses, working our volunteer hours, and on and on. I hope the next month will be a little calmer. My plan now is to be able to have some time to sort through all the junk I “found” when we moved, and get rid of some of it. I was truly embarrassed at how much stuff I have accumulated in the six years we lived in that little trailer.

In other news, I heard from my granddaughter Sarah’s mother, my ex-daughter-in-law (EDIL). She gave birth to a new baby girl (with her new husband) in Tacoma, Washington. She says Sarah is tickled to have a baby sister. She is making all A’s in school (I’m not surprised at that) and has made some new friends since they moved up there. They are going to Tennessee for a few days to have the baby dedicated at their church there and to have Sarah baptized. I am glad that my EDIL is happy.

I also heard from my new daughter-in-law, Sarah. We call her Sarah England, because it is so confusing to have Sarah the granddaughter and Sarah the new daughter-in-law. Sarah England and Seth, my son, are coming to the states in January. Well, at least Seth and Michael are coming, and Sarah is in the process of getting her visa. She may have to stay in England a month or six until it comes through, but they are working on it and have a “B” plan, in case they have to be apart for a few months. Seth will be stationed in Maryland at Andrews AFB, just a little hop from Urbanna. Jim and I are looking forward to spending some time with them this coming summer.

Oh, and Rebecca called to tell me she is going to move in with “Not My Boyfriend, Joe”. He has been her “friend” for several years, and has just bought a new condo. She is going to be his room-mate. She will be paying the same rent she pays now for her tiny walk-up apartment in Ghent, and will have a lot more room. She also said that he will buy the groceries and she will do the cooking for them. She is a pretty good cook, and she has been cooking for him for several years, but at least now he will be paying for the groceries.

Becky, our other daughter, has almost the same arrangement with her room-mate, Scott. He has been her friend since high school. When she bought her condo in Atlanta, he moved in with her as her roomie.

Emily told me that she moved Spencer from the Lutheran kindergarten she had in because the pastor there washed his mouth out with soap. Can you believe that? She said while Spencer was going there, he stayed in trouble all the time. The teachers and the principal of that school said he started fights with other children, pinched them, bit them, tried to take toys away from them, and said bad words. Then, when Emily was there as the “room Mom” for the Halloween party, she observed that Spencer was laying on the floor playing with a truck when another child came up and tried to take it away from him. When Spencer said, “No, I was playing with it first”, the teacher said, “Spencer, stop that!” Emily said it was like the teacher automatically assumed that Spencer was the bad child, even though she was sitting right there and saw the other child come and start the little dispute. Spencer has been at the new school for two weeks and has not been in trouble one time. The teachers there say they don’t see any of the problems Emily told them about at the other school. Hmmm…

I guess that is all the news I have for the moment. What’s up with “all y’all”? Feel free to post comments…