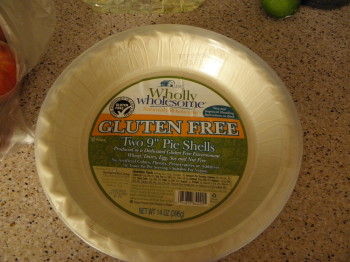 I received some of these Wholly Wholesome Gluten Free frozen pie crusts for review. To do the review, I decided to make a two crust Home Made Peach pie, and a one crust Lemon Meringue Pie. This would give me some idea how the crust would work with each techinque.

First, I have to say that this frozen pie crust tastes good. It does not have any of that “bean-y” aftertaste you sometimes get with gluten free foods. It just tastes like pie crust. Second, if you are going to use them to make a two crust pie, you have to let the crust thaw out completely before you can work with it. I didn’t do that, and because of it, I had a really hard time getting the top crust out of the foil pan it came in. For that reason, it sort of fell apart on me. All in all, though, if you can get the top crust out and placed on the pie, it does taste good. And if you are better at handling the pie crust dough, it should look good, too. The Wholly Wholesome Gluten Free Pie Crust browned up to a golden brown and would have looked so good if I had not messed it up.

The Lemon Meringue Pie came out perfect. I browned the crust first before making the filling, and as you can see, it made for a beautiful presentation of the pie.

I was happy that the crust stayed put together when I cut pieces to serve it. Some of the pie crusts I have tried don’t.

My husband said the crust was too hard, but that could have been because I cooked it too long. It did taste good to me and was easy to use.

Find out more about Wholly Wholesome, and where to purchase them, at their website.