This is Michael, my oldest grandson. I can’t believe he is almost 16 years old. He is getting so handsome, and looks a lot like his Dad at that age. I also can’t believe he is in JRROTC! I am looking forward to seeing him in his uniform. He was happy to be going to school this year, you can tell by the look on his face.

Sarah is in the eighth grade this year. She gets more beautiful the older she gets, at least to me. She is looking so grown up, especially with the handbag she picked out for me to buy her. She told me she doesn’t have a boyfriend because boys “have cooties”. Good! Keep thinking that. 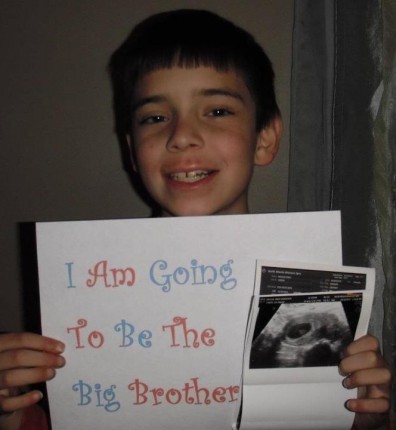 Spencer is my middle grandson. He is ten years old, and had a very important message for me last week. He is going to be a big brother in February. I’m not playing favorites by showing you two photos of him though. This one is his back to school pic. He’s in the fifth grade now.

Owen started to Pre-K this year. His Mummy told me that “he he was unhappy about going to school, and told her he didn’t want to go. He had no tears getting on the bus but he looked like he was going to cry when he was going to sit in his seat”. When he came home, she said  he “did good at school and got a happy face for good behavior in his journal. He got a stamp on his hand and stickers too.” Well done, Owen!

And, even though she is not old enough to go to school at 2, we can’t leave Miss Amelia out. She had a happy happy day stomping in puddles: