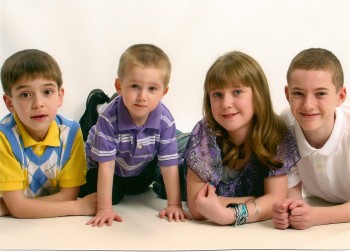 These little people are the ones who make me FabGrandma. They are all the loves of my life, after FabGrandpa and my own children, who just happen to be their parents. I am always amazed at how much they have grown since the last time I saw them, although I shouldn’t be since it has been two years since I saw my son’s children.

But this time, I saw more than physical growth. They had each grown in maturity in ways that I had not noticed before.  Spencer, the little guy on the left in the yellow shirt, was diagnosed with Tourette’s syndrome in October. Because we now know what it is that makes him different and unique, we as parents and grandparents have been better able to help him understand why he has tics and why other children sometimes find that scary. He is doing lots better at being able to interact with others, and because of that he is doing better in school. Yay, Spencer!

The last time we saw Owen, he was just two months old. So, yes, seeing a physical growth was expected. That he was able to call me and FabGrandpa by name by the end of the week was awesome. He knows several songs, like Twinkle Twinkle Little Star, and The Wheels On The Bus, and proudly sang them for us.

Sarah is an amazing artist. She can draw very awesome pictures in just a couple of minutes. She told me she knows she wants to go to college, either at the University of Kentucky or at Harvard. She made the Honor Roll at her school this semester and is in the Beta Club. I was really impressed with her when we went out to eat. She made very good choices from the menu, and ate what she ordered. The day we went to Longhorn Steaks, she ordered the chicken tenders with steamed veggies and ate every bit of it. At the Thai food place, she ordered sweet and sour chicken. The waiter tried to talk her out of it, but she said “I’ll just stick with the sweet and sour chicken, thank you.” She ate all of it.

Michael, the oldest grandchild, also made the Honor Roll. I was really proud of him for that, because he was expelled from school when he was 10 for his behaviour, and was home schooled for more than two years. He only went back to public school after Thanksgiving, so for him to make the Honor Roll was a really big deal. He was a good helper, too. On the day they left, we were all sitting in the lobby of the motel. His father gave him a key to the room, and told him to get a cart and bring their luggage down. Michael went up, loaded the cart, and brought it down all by himself.  This was a big improvement over two years ago, when anything we asked him to do was met with him throwing a fit.

I am proud of all the FabGrandchildren, and I love them all so much!

I didn’t make anything this week, because I was on vacation, but wanted to brag about my grandchildren. Thanks for stopping by.