Hide Search
Share
Tweet
Pin
Share
0 Shares
When Becky was here a while back, she gave us the news that she is going to be getting married. We are very excited and happy for her. We have not met her young man yet, but will when we go to Georgia this winter.  She is very nervous about her Dad meeting The Guy. Dad is just not good at meeting The Guy.  Lord knows, he tries, but somehow it usually doesn’t go well on that first meeting.
Becky and The Guy have set their wedding date for February 20, 2011 and they have reserved a very nice venue for the wedding. She is sending me links for florists and musicians.

I have started looking at mother of the bride dresses online. I know it is kind of early for that, but I remember when my youngest daughter, Emily, got married, we looked for weeks and weeks for a dress. It’s not that I am that picky, it’s just that I don’t think the people who make mother of the bride dresses are very realistic about what a 57 year old woman looks like in a dress. 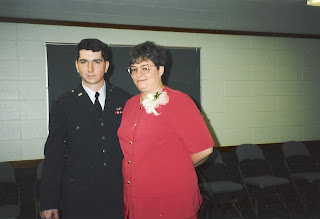 (Here I am as mother of the groom in 1995. The red dress worked fine back then. It was a less formal wedding at a church in Smyna, Ga.) 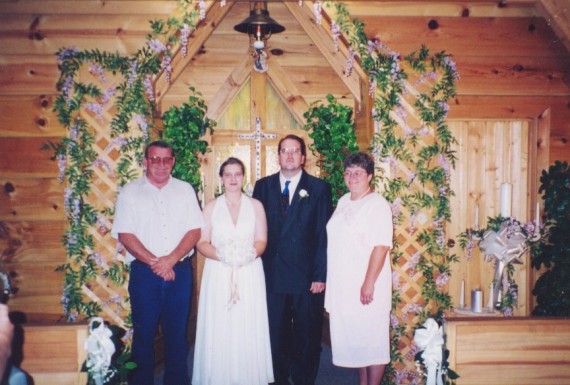 At my daughter's wedding in 1997. Pink--not such a good choice.
Have you ever seen some of the stuff they have to offer these days?  Well, let me show you. 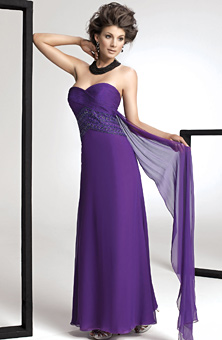 That dress was actually listed as a mother of the bride dress. I don’t know anyone who has a daughter old enough to get married who looks like that, or who could actually wear that dress. I can’t even imagine it in a size 24.

This one is a little better, at least I can picture it in a plus size, but does it really have to be that shiney? Do they really think a large woman wants to draw that much attention to herself? I don’t know how formal the wedding is going to be, but if the occasion calls for it, this dress may be ok. Just wish it didn’t glow.
And yes, this one was in the category of mother of the bride, too. It shows a bit more of the gozongas than I would like.
Who are these people who would wear something like that to their daughter’s wedding?
I think this one would make me frumpy. What do you think? Or am I really too picky?
I DID find a couple of dresses I like. This one, if it is a more formal event, I think would look real nice on a “big boned” lady like me. I like the mint green, but I wear a lot of pink, too.
And for less formal, I might just pick this:

It would depend on how it looks in person when I tried it on. At least the people who own that website are using a plus size model so you can get a somewhat realistic idea of how that dress would look on a larger woman.

And though I don’t think this one would be right for a wedding,

I do like the looks of it–except that I know something that clingy wouldn’t look good on me. And there is that cleavage thing again, too.

So, there you have it. All of these dresses were found in the “mother of the bride” category online. I think I need help.