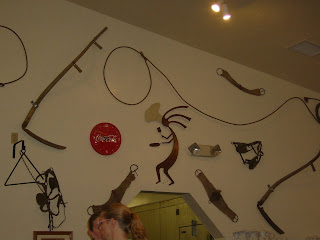 We spent the night in Page, at Amerca’s Best Value Inn, which turned out not to be what it’s name claimed. For only $116 per night, we were allowed to listen to the crackheads upstairs from us stomp around their room until well after 3 a.m.  I really don’t know what they were doing up there, maybe they had a bad case of Montuzema’s Revenge and had to run to the bathroom repeatedly during the night, who knows? But, I can tell you this: They kept me awake most of the night, and the maids said their room was trashed the next morning.  At any rate, I would not recommend staying at that motel even if it is the only one in Page with vacancies. I’m just sayin!
After leaving the motel and eating breakfast, we went on a guided tour of Antelope Canyon. Wow! OMG!  I have been wanting to go there forever! I am so glad we got to go on that tour. It is so fabulous. I took over 150 pictures, but I will only be showing a few of those here.  I checked them out online, and all the different tour companies websites quoted prices of $32 per person for the one and a half hour tours.  But, we walked in and paid for our tour in person, and for three of us it was only $88. It was the best $88 we spent all weekend. 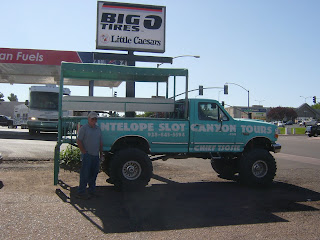 We rode out to the slot canyon site in this big four wheel drive vehicle. It was a very bumpy ride in places, but it was fun. 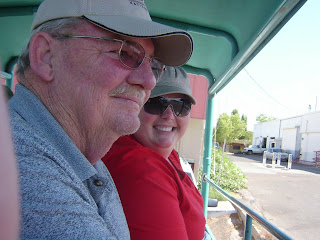 There are Becky and FabGrandpa on the truck, waiting to take off to the Navajo Reservation. 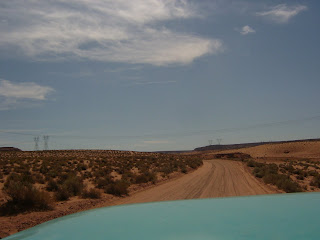 We bumped down this road, which is actually a wash when the rains come. Notice the power lines–there is a nuclear power plant nearby. 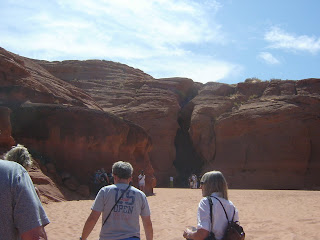 We finally got there, and got out of the truck. The ground is very fine sand, which made walking difficult, but we managed to do it. Becky was wearing flip-flops, and I had on sneakers. My shoes were full of sand at the end of the tour. 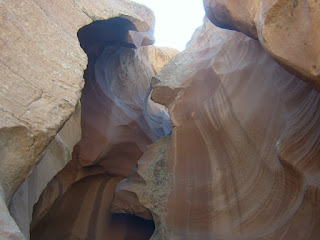 This is the entrance to the slot canyon. 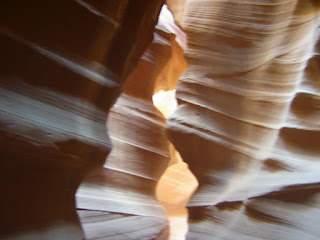 It is so hard to describe this canyon to someone who has never been there. It is very deep and narrow. The sun shines through the top of the canyon and makes the inside glow orange and red. At different times of the day beams of light come in and iluminate the walls of the canyons. It is absolutely amazing! 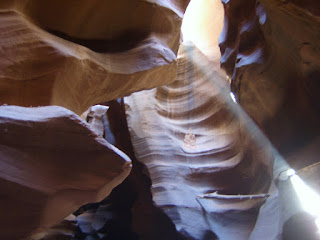 Of the many pictures I took, a lot of them are not very good. These are some of the best ones. You can get a “Photographer’s Tour” for a little more money. You get to stay longer, and the guides give you more time to take pictures at each stop along the way of the tour. 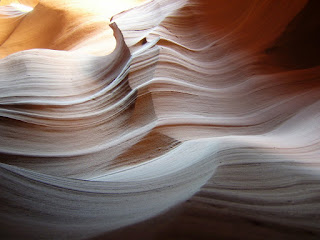 The tour guide took the photo above for me. He was very helpful in letting people know what settings to use on their cameras, and in some places he took photos with each person’s camera for us, to make sure we got some good shots. 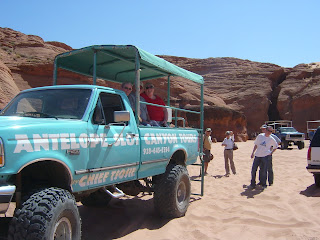 There we are, back on the truck after an hour and a half of tour time in the canyon. It was an awesome tour, one of the best tours I have ever been on.  The only thing about this tour I was not happy with, was that there are five tour companies that take people on tours of this canyon each day. There were probably close to 300 people in the canyon at one time. Considering that it is a very narrow canyon, it was very crowded.   However, that was a very small price to pay for such great tour, and to get to see the place with my own eyes. I want to go tour the same canyon again, at a different time of day.

If you ever get a chance to go to Arizona, Page has to be on your list of places to go, and this tour has to be top of the list!