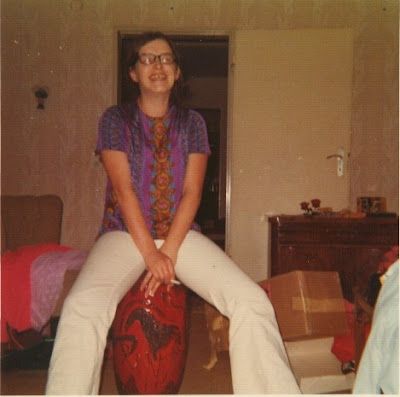 This is a picture of me, around Thanksgiving, 1971 at my home in Neunkirken, Germany with a vase our neighbors gave me for Christmas. My first husband was in the Army, and I had gone over to Germany to live with him and await the birth of our first child. My son was born in Wuerzburg on November 14, 1971. Shortly after his birth, we found out that my husband was going to get an early release from the Army. So, we opened our Christmas presents early, then immediately packed them up for shipping home. I flew out of Frankfurt, on my way to Atlanta, the day before Christmas Eve. My son was one day short of being six weeks old.

After my husband dropped me off at the airport in Frankfurt, there was a flight delay that lasted about six hours. The delay caused me to miss my connecting flight from JFK in New York, so I sat in the airport in New York for another 12 hours, waiting for a standby flight. I finally got on a flight to Atlanta because my son was the youngest baby waiting, and I was running out of supplies of formula for him. I was so happy to finally arrive in Atlanta at Hartsfield Airport, way beyond exhausted. And when my mother picked me up? The first words out of her mouth were “Be careful with the baby.”