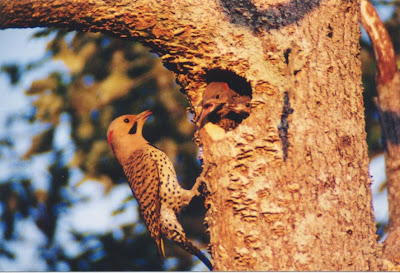 The last year that we owned our house, a pair of flickers chose a dead tree near the deck to build a nest and raise their young. We got a “bird’s eye view” of it all. The couple began by coming to the tree for several days in a row to check it out. Next, they pecked an almost perfectly round hole into the tree.

They flew in and out of the hole for several days, bringing nesting material with them. One day when I was home in the middle of the day, I saw a starling go in the hole while the flickers were away. The male flicker came home to find the intruder. As I watched, I heard a lot of squawking and saw black feathers flying out of the hole. The starling managed to escape, and he never tried that again!

Soon, there were baby bird noises coming out of the hole in the tree. I borrowed a 35 mm camera with an extended lens and a tripod, and sat out on the deck for hours, waiting for a good shot. I was rewarded with several photos of the flickers feeding their babies. All too soon, the babies grew and fledged, and it was over. What an awesome summer that was!