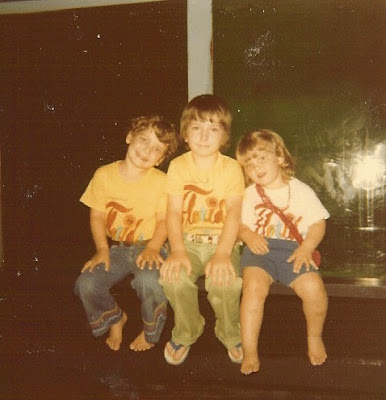 This was taken in June of 1978, in Panama City Beach, Florida, on the only vacation my first husband and I ever took together.

My kids were so young, and innocent, and sweet then. They loved the ocean, because as one of my daughters said at the time “This water plays with you, Mama!.” They played on the beach all day, running and jumping in the water. We took them to Sea World, I think was the name of it. My son was afraid of the parrots, and after much coaxing, very timidly allowed two of them to rest on his shoulders for a picture.

This was also long before the days when mothers were warned about putting their childrens names on their clothing, so my youngest had a hooded sweatshirt with “EMMY” on the back of it. She kept asking me how everyone knew her name. And if this were a better picture, you would be able to see that my oldest daughter, on the left, has a black eye–she got out of the car and walked into the motel room, right into the corner of the dresser on the first day of the trip.

I miss those days, when my children were so carefree, and cute. Now they are all grown up, going on vacations of their own, with their spouses, children, and boyfriends. But would I go back to that time? Not on your life!

My best memory of that vacation though, is this: We arrived in town late in the afternoon. We were starving, and wanted seafood for dinner, so we found a restaurant just down the beach from our motel. We were all dressed in shorts and flip-flops. After we were seated, I looked around the room, and there were people dressed in formal attire, and a bottle of champagne chilling on their table. When THEY saw us, there was a heavy visible sigh from both of them.

We ordered our food, and all three of my children sat patiently at table, waiting for their meal, not uttering a word. When the food arrived, they put their napkins on their laps, and ate their meals, with very polite family conversation going around the table as usual. They were good as gold sitting there in their booster seats in that fancy restaurant.

When our check arrived, the man in the tuxedo at the table across the room walked over and said, “When you walked in, I just knew my meal was going to be ruined. But your children are the most well behaved I have ever seen” and he paid our bill for us. Little did he know that I threatened their lives out in the parking lot before we went inside, and they knew I meant it. I think it was the proudest moment of my motherhood.