But first, I wanted to talk about making a monthly menu. One of my bloggy friends, Terri, of Terri Terri Quite Contrary, wrote this:

“I wish I were so organized with my shopping. Sadly, for lack of more time and energy, I end up grabbing a few coupons and just tossing whatever looks good in the cart. Nothing lasts long with teenagers in the house anyway.”

Now, I will confess that it does take some time, but not as much as you might think. You see, last winter when I was yet again in the off season, living off our savings until spring came and we went back to work, I made up four monthly menus, and saved them in my “Budget” folder. So now, when I need to make a menu for a month, I might use one of those as is, or I might use it as a starting point to make a new one. Another thing I did when I was sitting around doing nothing last winter, was make a complete shopping list for each of those four monthly menus. So, now that I have the menu and the shopping list ready and sitting on my hard drive, all I have to do is print it off, shop my pantry first, and go to the store.

I also admit that not everyone has the need or the desire to shop for an entire month at a time. I didn’t used to do it. When I lived in a regular house and acted like a normal woman, I went to the store every week, and didn’t even make a list. If I forgot something, there was a Publix Grocery Store less than half a mile from my house.

But now, I have this new life, you see. I live in a travel trailer, where the whole house has about 300 square feet, and the refrigerator/freezer is a whopping 8 cubic feet combined. And I share this space with another person. And both of us like to eat. We like to eat a lot. And one of us has to eat a special diet, that is free of gluten. Right now, we are living in a remote area, where the closest decent grocery store is at least 50 miles away. Wal-Mart is an 80 mile drive. Shopping for groceries is an all day affair. A love affair it is not. Hence the once a month shopping. Oh, and did I mention that all of the refrigerated and frozen things I buy have to fit in two coolers in the back of the truck for the ride home? I have to be organized to make it all work. What is the point of buying it if I can’t put it in it’s proper place when we get it home, I ask you.

However, if you would like to save both time and money, making a menu and a shopping list is very useful. It could also save you some time if you are the primary grocery buyer and meal cooker. If you post the monthly menu where everyone in the house can see it, someone might just make a meal for you one day. Without you asking them to.

Another thing is, just beause you have a monthly menu doesn’t mean you have to eat the meals in the order they are on the plan. I just print out the plan for the month, and mark off each meal as we eat them, so I know what I have still on hand. Adn I only plan the dinners, because breakfast is just breakfast. It will either be eggs, pancakes, or leftover eggplant parmesean. It has worked for me. Your mileage may vary.

And, to address the part about nothing lasting in a house with teens. Honey, you ain’t seen how much FabGrandpa can eat! I solved the problem of him eating things I had planned to cook by giving him his very own cupboard. Yes, the FabGrandpa cabinet has nothing in it except for his snacky and lunchy things that he can eat any time he so desires. It makes him happy, it makes me happy, and so life is happy here. No more of him eating my special olives for that thing I wanted to make.

Ok, I think that about covers it. If anyone wants one of my monthly menus with a shopping plan atached, let me know. I’ll think about it.

On to the recipe I promised. This morning (ok, this afternoon) we had scrambled eggs with zuchinni and onions. I chopped up a zuchinni and half an onion, sauteed them in some butter in a skillet, added three eggs, and scrambled them up. Yummy.

Dinner was Eggplant Parmesean with a side of this: 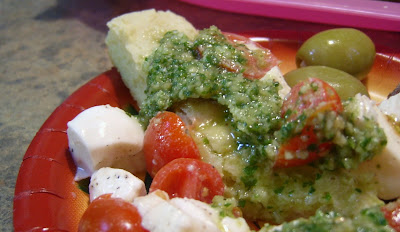 I made the bread using up some flours I had on hand, because my online order from hell has not arrived YET. Here is the recipe I used:

Heat the milk to lukewarm in the microwave, about 45 seconds. Add the brown sugar and yeast, set aside. Mix all the dry ingredients together well. Add the eggs, oil, water and milk. Beat well with electric mixer. Scrape all the dough into the center of the bowl, spray with olive oil. Cover with plastic wrap and let rise for 30 minutes.

Line a baking sheet with aluminum foil. Spray the foil with olive oil. Spread the bread dough on the pan into a rectangle about an inch and a half thick. Bake in a 350 degree oven for 45 minutes. Remove from oven and let cool. Cut the rectangle in half. Cut one half into six bread sticks.

The main course for dinner was Gluten Free Eggplant Parmesean

1 large eggplant, peeled and sliced into 1/2 inch thick slices
1 cup milk
1 cup gluten free flour (you can use whatever your favorite flour is. Tonight I used half white rice flour because I was using up the rest of the box, and half buckwheat flour. but any flour is ok, as long as you like it)
salt and pepper to taste
olive oil
8 oz gluten free spaghetti noodles. (I used Deboles corn angel hair pasta, but you can use any gluten free pasta you like)
1 16 oz jar gluten free spaghetti Sauce. (I used Classico Traditional Sweet Basil. Again, you can use any brand you like, even make your own, just make sure if you buy prepared that it is gluten free)
2 cups Italian Blend shredded cheese or 2 cups mozzarella cheese.

Cook the spaghetti according to directions on the box, drain, rinse, set aside. Meanwhile, sprinkle the eggplant with salt, and let it weep. Rinse. Sprinkle with salt and pepper.

Dredge each slice of eggplant in flour, dip in milk, then back in flour. Fry in olive oil over medium heat until browned on each side. Drain on paper towels.

Sprinkle the cheese evenly over the top of the casserole. Bake in a 400 degree oven for 35 minutes. Remove from oven and let rest for 15 minutes before serving.

This casserole freezes well, and reheats well. Serve with a tossed salad or with bread and pesto.