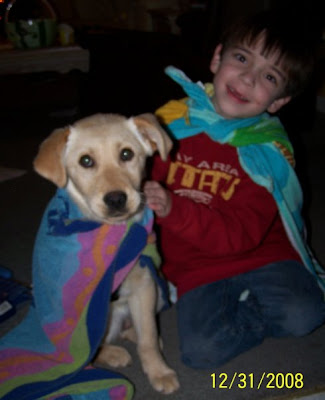 My FabGrandson, Spencer, asked for “a new real dog, not a toy” for Christmas. His Mommy, my daughter, Emily, told him that Santa sent her a note and told her where to go to find a good dog, because he couldn’t put a puppy in his sleigh. So, they went to the animal shelter in their town, and found a golden lab mixed puppy. They named her Sophie.

Sophie had contracted the parvo virus somewhere along the line, and was very sick the week after Christmas, and spent several days in a doggie hospital, but she survived, and is now back home. Sophie, the Superdog and her boy, Spencer. Aren’t they both just the cutest?