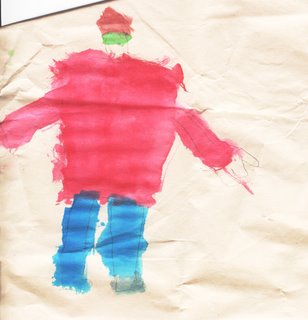 Ten years ago on October 13, 1996, my grandson Michael was born. He celebrated his birthday this year in England with his Dad and step-mom, and six of his friends. I have never spent a birthday with him, because he has always been far away, but I try to call and talk to him each year on the day of his birthday.

When I spoke to him, he asked me if I would send him a map of Maryland, because he is moving there in January and wants to see what it looks like. So, since I AM the Fab Grandma, I drove up to the Maryland Welcome Center today and picked up a map and a ton of brochures to send him. He will read about the National Aquarium in Baltimore, the beach at Ocean City, and the ponies at Assateague Island. I hope I can take him to see those ponies next summer. Since I do not have a recent picture of him, I have posted the “self-portrait” he did for me when he was six. 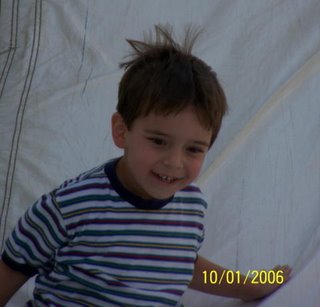 Spencer’s mom, Emily, sent me this photo of him sliding at the fair. He always looks so full of energy When he started to school this year, he was getting in trouble a lot for kicking other students and taking away their toys. He has been doing a lot better lately. Emily says he only had one frowny face last week. He is learing Spanish in pre-K! Wow, they start foreign languages earlier and earlier now. I think we didn’t have a foreign language class until 10th grade when I was in school. 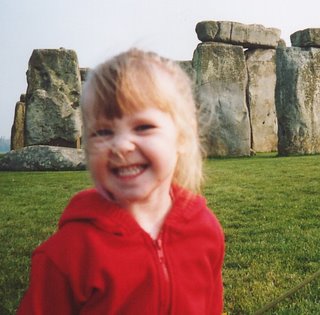 I have not heard from Sarah or her mother lately, but her mom is pregnant and having some difficulties, so it may be a while before I get any new pics. So, here is an old one: