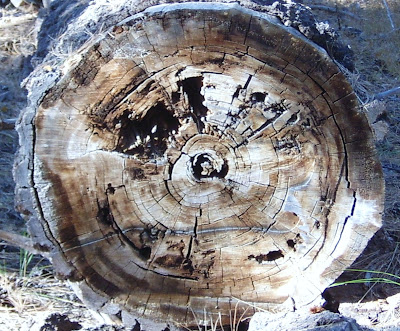 This huge tree fell near the employee parking lot at the admin office some time in the past. It was cut so they could clear the area, but left this giant ponderosa skeleton laying there. I love the natural patterns in the log. 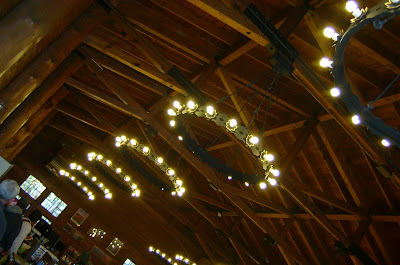 We went over to the camp store to cash in some bottles. These are the light fixures hanging from the ceiling there. Cool.

Have you noticed how the advertising and commercialization of Christmas has come earlier and earlier every year? When I was a kid, the tinsel and decorations for Christmas did not appear in stores at the very least until after Thanksgiving, or even until after December 1 every year. Now, you’re lucky if you don’t see the Santas and Christmas trees and decorations in the stores right after Labor Day. Come on, give us a break. In my mind, this Christmas overload just creates greed and an entitlement attitude in our children. I wonder just how many of them know WHY we have Christmas. If they think the whole point of it is to get presents and buy stuff.

In my own life, I have been guilty of spending way too much every year for many years, trying to make sure each and every person on my shopping list got every thing they asked for. And because retailers were putting stuff out earlier and earlier, the people on my shopping list wanted more and more because they saw new things every time we went to a store. I was going broke trying to do that. One year I realized that I had not yet finished paying for the last Christmas before the stores were stocking their shelves with holiday displays again. It wasn’t that I has spent all that much, it was that they were putting out the displays in September.

I decided that I was tired of being broke all the time, and wanted to put a little bit of the Christmas spirit back into my holiday season, and save money at the same time. I started making gifts–a crocheted afghan, baked goods, homemade trail mix, pressed flowers in a frame, and other stuff like that. What I found though, is that a lot of people on my list don’t appreciate that sort of effort. So, instead of going back to spending big bucks on Christmas gifts, I cut back on my list. I thought that it was the thought that counted, and my thought and time that went into my efforts were not being appreciated. If I have to buy an expensive gift for that thought to count, then in my thinking that defeats the whole concept of Christmas. And I feel like the extravagant advertising and extended times for retail displays add to this gimme gimme gimme attitude more and more every year.

A blogger I read, Thimbelle over at Creeping Towards Normal, posted about a campaign of sorts to push Christmas back to where it belongs, AFTER Thanksgiving. Her friend, Suldog, started it last year and he is continuing his efforts this year with his post Thanksgiving Comes First. If you agree with this concept and would like to see the retail establishments in this country put Christmas back in the proper place, after Thanksgiving, let the world know by writing a post about it on your blog, and linking back to Suldog’s Thanksgiving Comes First post. Maybe we will get back to the lineup of school supplies followed by Halloween followed by Thanksgiving followed by Christmas. I want to have my Thanksgiving turkey before I have to start thinking about Christmas. 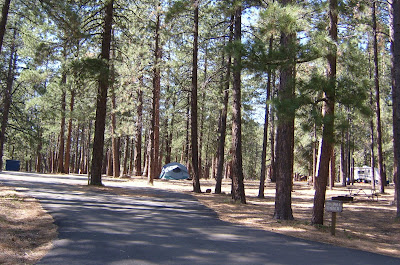 The temperature got down to around 16 degrees last night, with a high of around 35. Farenheit, for those who want to know.

At the entrance to our park, there is a sign we put up in the window when all the campsites are sold, that says “Campground Full”. That sign has been in the window every day since the park opened in May. Several people who came through the gate yesterday asked me if the campground was really full, because they could not believe there would actually be people camping in weather that cold. Yes, there were quite a few hardy souls out there, camping in tents. Me, give me a travel trailer with central heat, thank you. 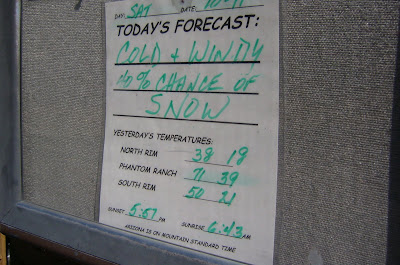 The forecast for today at the North Rim was “Cold & Windy, 40% chance of snow. The high was 38 and the low is supposed to be around 18 tonight. Wooooooo, that is cold! 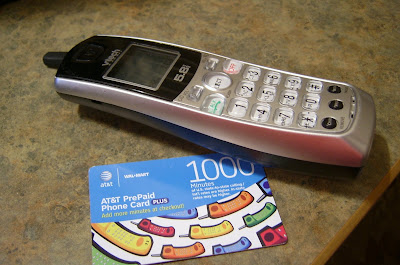 I live so far out in the boonies that I can not get a signal on my AT&T cellphone. I have to use a, gasp, landline, if I want to call someone. And because I only got the BASIC service, I also have to use a calling card to make long distance calls. As if the calls I would make would NOT be long distance. How far out is it? I have to drive 75 miles to buy groceries. If I want to go to a Wal-Mart or Borders Books, or to the chiropractor, I have to drive 125 miles. But hey, I can see a gajillion stars at night. What a deal! 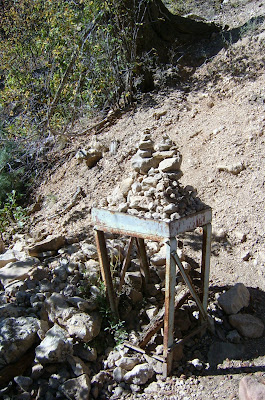 Rock pile on the North Kaibab Trail. It is sort of a ritual for hikers to stack the rocks, trying to be the one to get the one on the top to stay put. I didn’t add one to the stack because I really didn’t feel like a real hiker there, more like an imposter. But next time, yeah! 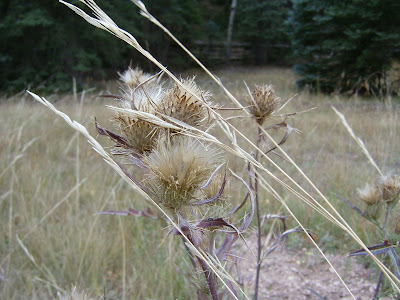 A dried flower arrangement on the side of the road. This is thistle. The flowers were purple before they dried up. I still think they’re pretty.