I received a product from Air Oasis for review. All opinion are my own.

Fabgrandpa and I live in the country on a dirt road. When the weather is dry, like it has been for the last month or so, that dirt road is dusty. Cars passing by the house on the way to where ever they may be going stir up that dust, and it finds its way into the house. Last  year, we replaced all the windows and the front door, and installed a storm door. During the installation process the work crew caulked all of the crevices around the windows and doors, but somehow some of  that dust still makes its way in.

Because Fabgrandpa has COPD, the dust from the road sometimes causes him to have coughing spells. He has a “rescue” inhaler, that helps recover from one of those coughing attacks, but I thought it would be so much better if he didn’t have them to start with. So, when I was asked to review the Air Angel Portable Air Purifier, I was happy to say yes. 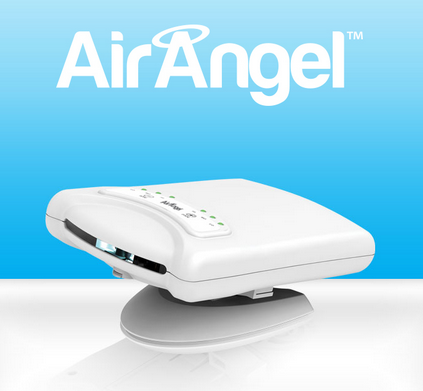 The Air Angel Portable Air Purifier is small, about the size of a hardback book, and can be used just about anywhere. Air Oasis has created the Air Angel just for families with children and/or pets to protect rooms from germs, viruses, aeroallergens, and harmful pollutants in the air and on surfaces. We might not be babies, but I have seen an improvement in the air quality in our bedroom from using the Air Angel in there. It comes with a DC cord to plug into a house electrical outlet, and a car type plug for using in the car.

One of the things that impressed me is that Air Oasis sent a kit to test for germs in the air before, and after, we set up the Air Angel in the bedroom. First, I opened one petri dish, added the liquid medium  provided, and set the open dish in the middle of our bed for one hour. When the hour was up, I sealed the petri dish with tape, and set it out of the way. I turned the Air Angel on, and left it on 24 hours a day, 7 days a week. At the end of one week, I set up the test again with the second petri dish. I set the second on in the same spot on the bed, and left it for an hour. At the end of the second week, I looked at the things that grew in both petri dishes. The first onemostly gray and dirty looking. The second one more white than anything else. To me, that is proof that the Air Angel IS removing germs and pollution from our air.

Air Angel is able to both clean and sanitize the air and surfaces in up to 250 square feet by using a proprietary technology developed by NASA requiring zero maintenance for one year. Delivered with a power cord, charger adapter and zipper case, the white mobile unit is designed to be plugged in on shelves and surfaces out of children’s reach to invisibly purify and sanitize the air and surfaces around them. Primary benefits of the Air Angel device include:

Air Angel has created a unique coupon code exclusive to my readers in celebration of Air Angel winning the PTPA Seal of Approval. For 48 hours, you will have the opportunity to receive $50 discount off of the Air Angel by using kareneidson50 promo code