This post is sponsored by MGM Gold Strike Resort and Casino 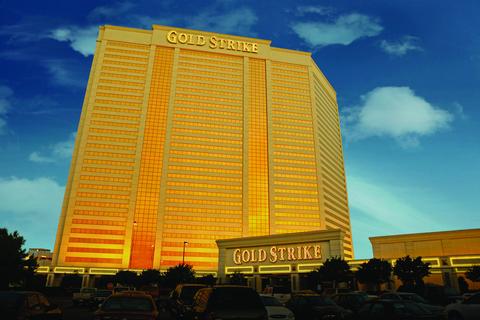 On Saturday afternoon of our stay, Elaine and I were treated to a behind the scenes tour of the Gold Strike Casino and Hotel. We learned a lot from the tour and from various employees of the facility. We were introduced to the Director of Hotel Operations Craytonia Collins,  and Front Office Manager Kyle Buggs, by the Communication Manager Keisha Oliver.

They all welcomed us to MGM Gold Strike Resort and Casino. Then we started on our tour. The first place we went was to the Presidential Suite. This is where the high rollers stay when they come to town to play at Gold Strike.

This suite goes for about $800 per night if you were to pay to stay in it, but Mr. Collins told us that the usual guests are high rollers who are comped for the room. Can you imagine staying in such a huge suite? He also said that some of their guests who stay in this suite are flown in by private jet for the weekend. I guess that is how the other half lives!

Look how big that bed is! The whole bedroom is separate from the rest of the suite. I wanted to stay in that room for just one night.

From the Presidential Suite, we went to Housekeeping, where we met Carolyn Wright, Director of Housekeeping. It was so interesting to me to find out that housekeeping handles about 30,000 pounds of linens a day with 60% occupancy of the hotel. That is a lot of towels and sheets! They send all their linens out to a laundry service to be washed and folded. Even with that, they have 91 Guest Room Attendants, 10  Housemen, 13 supervisors, 5 managers and office staff, for a total of about 130 employees in the housekeeping department.

We left Housekeeping and went to Food Service. That was amazing to see. First, let me say, the kitchens here were very very clean. I was impressed. (Fabgrandpa and I delivered foods for a Hot Shot delivery company in the late 1990’s in a pick up truck, and we saw some really ugly kitchens.) The Executive Sous Chef, Anthony Cieplinski, took over as our tour guide for the kitchens.

Anthony showed us where the kitchen employees were making desserts and hors d’oeuvres for a private meeting that was to take place later in the day. They all looked awesome. There were little individual fruit tarts and crab cakes in progress when we were there. We also learned that everything they serve at the restaurants at MGM Gold Strike is made fresh on the premises.

All of the employees we met along the way on this tour were so nice to us, and every single one of them was smiling. They all looked so happy to be working at MGM, and that says a lot to me about a business. When the employees are happy, they must be doing something right. By the way, did you know that MGM Gold Strike Resort and Casino employs a total of 1,357 people?

This is just a small part of the employee dining room. All employees of MGM Gold Strike can eat here for free. The food was the same food that is served in the restaurants on site, and all of it on the employee buffet the day we were there looked really good. There were several options, with healthy choices available. This is so unlike any employee dining room of any place I ever worked.

Next, we went to the kitchen where they were preparing the foods for the Saturday Night Seafood Buffet. There was a huge stack of boxes of snow crab legs, taller than me. Anthony said that all of those crab legs would be served that night, and they would probably bring more up from the freezer before the night was over. They serve between 3500 and 4000 pounds of crab legs in a weekend.

They will serve this huge vat of dressing on the buffet in one night.

In addition to the snow crab legs, there are also steamed crab claws, raw oysters, steamed shrimp, and so much more on the buffet. Even Sushi!

Finally, the last part of the behind the scenes tour, was the liquor vault! This is where they keep all the alcoholic beverages at MGM Gold Strike.

The Assistant Beverage Manager Alex Thornton took us into the area of the liquor vault. We didn’t actually get to go inside to take a look at the inside of the vault, because anyone who goes in there has to have a member of security with them to go in. We did get to see the liquor setup, and I was so amazed!

The open liquor bottles are all set upside down in the troughs. See the pipes on the left side of this photo? When a bartender in one of the bars in the casino or one of the restaurants pours a drink or mixes a drink, the liquor is pumped through those pipes to the bartender’s spigot. The spigot has different buttons on it to program in the correct drink, and mixes it automatically from the wells in the basement. COOL! There were rows and rows of these troughs and pipes, leading all sorts of liquor and mixers to the different bars throughout the property.

Here are some interesting things to know about the casino:

Tomorrow, I will continue with the rest of the tour, where we met Jack Hanna of Into the Wild!