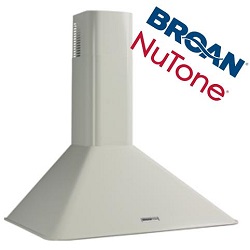 Yesterday was a big day for us with our remodeling. We finally found a handyman who came back to do the work after he came out to look at the job. We have been having the hardest time finding people to do the work for us when we are not using Home Depot for the job. This guy has had an ad in the local paper ever since we moved here, but we never called him until this week. Manny showed up when he said he would to look at the job and to determine if he needed any extra supplies.  He came back yesterday morning to install the Broan Range Hood for us.

First Things First. We Had To Move Some Electrical Connections.

In order to install the range hood, the handyman had to first move a 220 volt electrical connection from the kitchen to the enclosed back porch so we could move our dryer out there. The washing machine has been out there since we moved in, but the dryer connection was in the kitchen, so we have had the two appliances spread out between the two rooms. The dryer has been right next to the stove, so we have had to do careful planning about when to dry clothes or they would end up smelling like whatever I was cooking for dinner. Meatloaf scented jeans, anyone?

After the dryer was moved, Manny had to move the gas line for the stove as well. The area where I wanted to put the stove was too close to the electrical connection box, so I had to rethink where I wanted it to be. We chose to put it next to the refrigerator on the wall across from the sink. He left a 12 inch space between the refrigerator and the stove so that we can put a 12″ base cabinet there, so I will have room to put cooking utensils and other cooking equipment within easy reach of the stove.

The Broan Range Hood Was Easy To Install

After the gas line was moved, Manny and his assistant, Marino, set to work installing the range hood and chimney. They had to install a new electrical receptacle to accommodate the plug for the exhaust fan. After that, the range hood and chimney were so easy to install, I could have done it myself in my younger days. The hood part attached to the wall with metal brackets. Then the chimney part attached with more metal brackets.  The instructions that came in the box were very easy to follow. After they were attached to the wall, Manny caulked the hood with some silicone caulking. If you already have an electrical receptacle, you really can install this range hood yourself if you are good with tools.

I am very pleased with the style of the Broan Elite RM50000Rangemaster® range hood. There has not been a kitchen exhaust system in our house since we moved in. We have been putting a window fan in the kitchen window to draw cooking smells out of the house, but it didn’t work well, especially in the winter when it was cold outside. I am really looking forward to cooking my Thanksgiving turkey and dressing this year.

We still have some more work to do in the kitchen. As you can see, we haven’t finished painting, and there will be a base cabinet installed to the left of the stove, where the rolling cart is sitting now. The 12 inch base cabinet will be to the right of the stove, between the stove and refrigerator. It may take us another month or so to get it done, because we are very slow, but it is beginning to look like a modern kitchen. What do you think so far?