If your little one is between the ages of 3 and 8 (or even 80) they are going to love this  VTech® Switch & Go Dinos® Turbo Bronco the RC Triceratops™. It is a remote control car that changes from a car to a Dino using the remote control! It used 6 AAA batteries (which were not included so I could not make this one switch). If you decide to buy one, DON’T FORGET THE BATTERIES! 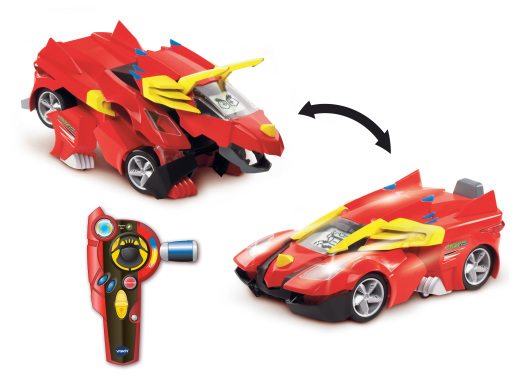 The car itself is pretty neat, sort of a combination of a race car with a super-hero look. It switches from a Triceratops into a car, and back again.

Bronco is a 2-in-1 electronic toy that fuses dinosaurs and vehicles into one awesome play experience. With the push of a button on his remote control, Bronco transforms from a fierce triceratops to a sleek race car. Use the remote control to move forward, backward, left and right in both vehicle and dino modes. You can even use the turbo charge lever to charge his turbo boosters. Then, press the turbo boost button to give him a burst of speed! Press the buttons on the remote to turn on his headlights, hear realistic sound effects and learn cool dino facts. Bronco’s LCD screen displays cool customizable dinosaur eyes and driver animations.

Your child can customize the screen display on the remote control to show cool dinosaur eyes and driver animations. And, the vehicle/dinosaur “talks”, giving fun dino facts and wild sounds.

VTech® Switch & Go Dinos® Turbo Bronco the RC Triceratops™ has a suggested retail price of $44.99. You can find it Amazon.com

One lucky Fabgrandma reader will win one. Just use the Giveaway Tools form to enter. Good Luck!