I am participating in a sponsored campaign for Beano. I received Beano products and compensation in exchange for my participation. All opinions are my own. 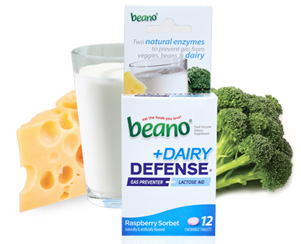 I have always had a problem with certain foods. Things like broccoli, garlic, and beans caused me to have bloating and gas. And wouldn’t you know it, that those three are some of my favorite things to eat. My husband and I eat a lot of garlic. I buy several heads of it every week. Broccoli is also a frequent item on our dinner table.

Gas was not the only digestive issue I have had. There were cramps, bloating, and just plain misery. Days and nights that I just wished that the feeling would go away.

I started eating a gluten free diet due to gluten intolerance. When I took wheat out of my diet, a lot of the bloating, cramps and general uneasy feelings disappeared. However, when would eat those three things, the broccoli, garlic, and beans, I still produced what seemed like an excess of flatulence.

Two years ago, I had some major digestive issues, and was hospitalized for over a month, and wound up with a colostomy. I was told by the surgeon who operated on me that I would have to be careful of what I ate, and to avoid things that produced gas, or things like corn, okra, tomatoes, and berries that had seeds in them. It was like just another group of foods I was not going to be able to eat.

One thing I found out was that when I did eat things that I knew gave me gas after my surgery, that the gas would blow up my colostomy bag. I would wake up in the night with that bag so tight, I thought it was going to explode, or pop off of me and fly around the room. I had to add things like eggs, peanut butter, eggplant, cheese, and asparagus to my list of things I really shouldn’t eat because they caused gas. This went on for about the first year. Then one day, I decided to get some Beano and try taking some before any meal that included one or more of the foods I knew was giving me a problem with gas.

I was so happy to find that using Beano helped, and the colostomy bag wasn’t in danger of flying off anymore. I just take two, and sometimes three, tablets before eating. It has made a real difference in my life. So much of a difference that I keep one bottle on the dining table right next to the salt and pepper shakers, and another bottle in my purse for when we go out. What foods do you avoid?®