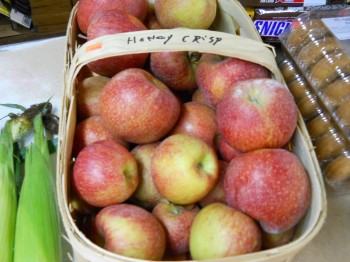 A Canadian company, Okanagan Specialty Fruit, is trying to get approval to grow and sell genetically engineered, non-browning “Arctic” apples (Docket No. APHIS-2012-0025) in the United States.

Growing  genetically  engineered  fruit such as apples could cause contamination of nearby organic or conventional apple orchards. Unlabeled GE apples could also find their way into non-GE fruit slices, juice, baby foods or apple sauce, products predominantly consumed by children and babies who are at increased risk for any adverse health effects.  We have no scientific evidence that these apples would not cause significant damage to our children’s and our own bodies if consumed.

The U.S. Apple Association, Northwest Horticultural Council (which represents Washington apple growers, who grow over 60% of the apples in the U.S.), British Columbia Fruit Growers Association and other grower groups have already voiced their disapproval of these GE apples due to the negative impact they could have on farmers growing organic and non-GE apples, and the apple industry as a whole.

This product is completely unnecessary and poses several risks to apple growers, the food industry and consumers. USDA should NOT approve this GE apple variety.

I have already sent my email telling the powers that be in Washington, D.C. that I am against approval of this apple. Please please please click on the link here and let your voice be heard. Say NO! as loudly as you can to stop the law and stop this product from being approved for being grown, sold, and eaten in the United States.