The good folks over at Glutino sent me some delicious gluten free Toaster Pastries at the beginning of May. When I was a little girl, I loved to eat pop tarts for breakfast. I also have to confess that I used to eat them pretty often for breakfast and snacks after I grew up. But when I found out I had to eat gluten free, I had to say bye bye to them. Until the first week of May 2013, that is. These toaster pastries are SO GOOD! I had to make myself eat only one at a time to make them last longer. They come in two flavors, Apple Cinnamon and Strawberry. I wish I had taken a picture of one of them before I ate them all up.

These pastries tasted equally good whether I just opened one up and ate it without heating it up, or if I put it in the toaster. The strawberry was my favorite, and I hope that they will make some in cherry flavor real soon!

Glutino also sent me a package of their Gluten Free Muffin Scone Mix. I decided to use it to make a Raspberry Banana Bread. It was so easy to use this mix, just measure out just like when I used gluten full flour, and mix in all the ingredients. The taste of it was pretty good, too. It didn’t have that “bean-y” flavor that some mixes have. 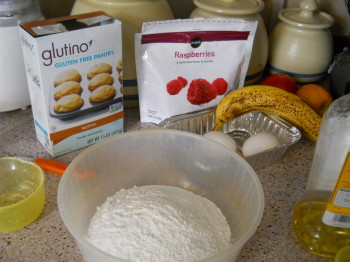 I used a recipe I found online for banana bread, and just used the mix instead of the flour called for in the recipe. I made a couple of changes because I did not have enough bananas to make plain banana bread, I used 1/2 cup of mashed bananas and 1/2 cup of frozen raspberries. I used Chinese Five Spice Powder instead of the cinnamon and nutmeg called for in the recipe. The taste of this Raspberry Banana Bread was marvelous! Even my non-gluten free husband was raving about it.

I did have to cook this bread a little bit longer than the recipe called for, but I think it is because the raspberries were wetter than bananas would be.

One of my winners will win two boxes of Glutino Gluten Free Toaster Pastries, one of each flavor. Just use the Giveaway Tools entry form to enter: