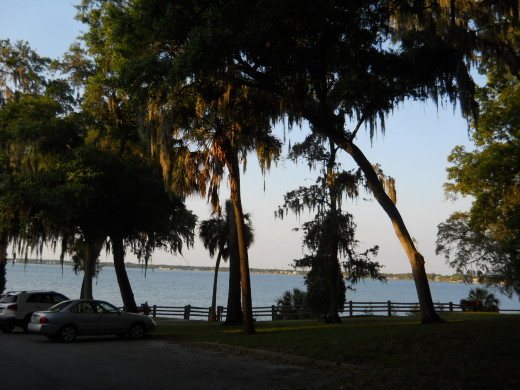 I may or may not have said here on the blog that I have decided to celebrate my birthday twice this year since I missed it last year. So, last week, Fabgrandpa and I went to Florida for a few days. We left on Thursday morning, and drove as far as Perry, Florida before we stopped for the night.

We stayed at the Holiday Inn Express. The guy at the check in counter was very nice, and offered us a nice discount for Veterans. They give the government rate for vets, which is about $25 less than the regular room rate. We have stayed at Holiday Inn Express lots of times in our travels, and we were not disappointed in this one. The only thing wrong with it was the smell. They had sprayed some kind of floral air freshener in the hallway and it was very strong. P.U. There was also a bad smell in the room, which I jokingly told Fabgrandpa that it smelled like someone pooped under the bed. At least after you got used to it you didn’t notice it.

While we were in Perry, we went to dinner at Goodman’s Barbecue. I am accustomed to Georgia style barbecue, and this was not anywhere like what we have had in Georgia. This pork was cooked with a dry rub. While it was a good taste, it was rather dry and stringy compared to other places we have tried.

On Friday we arrived in Safety Harbor, and checked in to the Safety Harbor Motel. Although this motel was probably built in the 1950’s, it was very clean and very comfortable and in a quite neighborhood. We slept like babies there.

The room we stayed in was a kitchenette, so we could have cooked meals in our room if we had wanted to. There was a stovetop, a microwave, a refrigerator, and coffeepot. There was a sink, and complete eating, drinking, and cooking items for two people. I don’t know how much it was per night, because our good friend paid for our stay for my birthday.

We had plenty of room to store our suitcases, with a full sized closet. There was also a desk and a dresser with plenty of drawers. The TV was VERY old, but it did work and there was cable TV and free Wi-Fi access.

WE didn’t get to stay long enough, but even at that, I enjoyed every minute of our time there. Our friend, who we both love so much, was so much fun to be with. We don’t get to see her often enough! On Saturday, Polly and I went to get mani-pedis. She had never had a manicure and pedicure before, and before we were done she was talking about “next time”. I can not imagine being as old as we are and never having had a pedicure before!

After that, we drove over to St. Petersburg and walked on the pier that is going to be torn down. It was the last day it would be open, so it was very crowded with people going for the last time.

It was hot out there but the view was magnificent.

When we left the pier, we drove over to Clearwater for dinner. We went to Cooter’s, a restaurant and bar. They were celebrating their 20 year anniversary so there was a band and lots of people there. I ordered crab legs, Fabgrandpa had blackened scallops and Polly had steamed oysters on the half shell. Yummy!

And here is me being silly:

After dinner we went back to the motel, and I collapsed into the bed. I stayed in bed most of Sunday, trying to rest up from all the activity on Saturday. Late in the afternoon, we went to downtown Safety Harbor, just a few blocks away. We had barbecue again at Brady’s. This barbecue was sooo good! They had a mango barbecue sauce that was very tasty.

WE walked a little bit on the sidewalk looking at shop windows, and saw this:

Fabgrandpa drove us home on Monday. I have spent all week resting and getting over our trip, and even though it wore me out and made me hurt so much, I really enjoyed it. We laughed so much my face hurt when we got home.