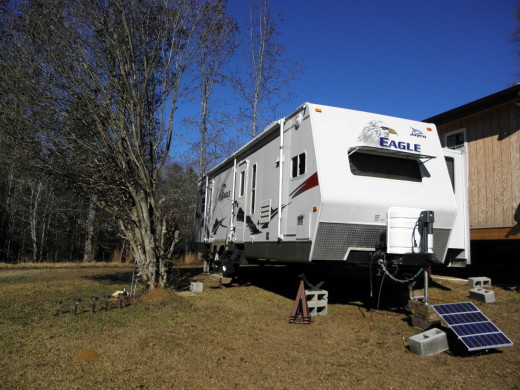 When we bought our house last winter, we decided that we would live in the RV in the back yard until we could save up money to buy some furniture. It was a good thing we decided to do that, since we had to do some serious drain cleaning in the house. All of the sinks in the house were stopped up and slow draining, something we couldn’t check before we bought the house because the water wasn’t on.

Once everything was set up, we were able to live in the trailer until we went back to work in Arizona. Our plan was to save enough money over the summer to be able to buy the basic furniture we needed to get moved into the house. Even though our plans were not exactly carried out, we knew that even if we didn’t have enough money saved to buy furniture we could always live in the backyard again because we had that plumber come out and install that sewer line for us.

Since we got back here in October, we have had to have a plumber come out three more times. The first time he came, we had hi repair the shower. It had no water pressure, so there was not enough water coming out to take a good shower. The second time he came, the pipes under the kitchen sink had been leaking. He had to also replace the thing in the sink that connected the sink to the drain pipe. It was black with dirt that wouldn’t come off.  The last time he came, he had to fix the outdoor water spigot. It was broken is such a way that it only leaked when it was turned on. I’m hoping that is the last time we have to see the plumber around here.

This is a sponsored post however, all the points and views are my own.