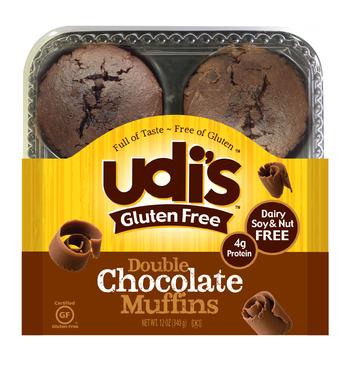 Death By Chocolate is one of those dishes that has been a traditional part of my Mother’s holiday table for just about as long as I can remember. I haven’t had it since I started eating gluten free in 2007. A week or so ago, though, I received a package of samples from Udi’s Gluten Free, and in the box was a package of their Double Chocolate Muffins.

I have tried three different gluten free brownie mixes, but they were all too “fudgie” or gooey to use in this recipe. The brownies my mother makes to put in her Death By Chocolate are more “cakey”and light, so I just never thought about using the gluten free brownies to make this. But, when I got those Udi’s Double Chocolate Muffins and took a bite, I knew immediately what I was going to do with them.

Chop the Udi’s Double Chocolate Muffins into small pieces. Place half of the pieces in the bottom of a triffle bowl or clear glass bowl.

Top with half of the prepared chocolate mousse. Sprinkle with the grated chocolate and crushed Heath Bar.

Top with a layer of Cool Whip. Repeat the layers, ending with Cool Whip on the top. Sprinkle with grated chocolate and crushed Heath Bar.

If you are wondering why I only used three muffins out of a package of four, well, it’s because I ate one of the muffins on the day they arrived. I was only going to taste it, but before I knew it, I had eaten the whole thing!