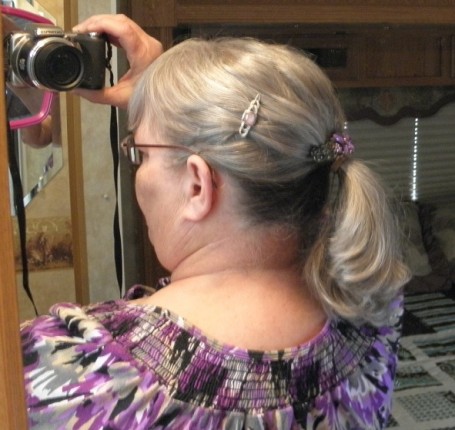 Anyone who has known me for a long time, though, would say it is my old hairdo. I loved my long hair, but in the last three weeks or so, it started coming out by the handful! My step-daughter, Becky, who is a hairdresser, told me it is because of the anesthesia from my surgery. I found this article, that says that hair loss after surgery is caused by shock to your body. Whatever it was that caused it, it made me shed really bad. It looked like a rat in the shower after I washed my hair, and whenever I brushed it, there was hair all over me, the floor, in the brush. Not just a little bit, but a LOT. And it was starting to be noticeable to other people. (You know, starting to look scraggly.) So, I made the decision to get it cut short.

It was a decision that took me a while to make, but every time I saw another handful of hair come out, the decision got easier. So, while we were in Kanab yesterday, I just walked into the beauty shop and asked them to whack it off. I told the girl “Don’t be afraid to cut it short. It will grow back.”