The voting for Favorite Grandparent Blog 2012 in the Reader’s Choice Awards ended last night, but the winner won’t be announced until March 30th. Whether I win or not, I FEEL like a winner to have had such wonderful support from my family and  friends in the blogosphere, on Facebook and Twitter. I planked you already for your votes, but there is that little matter of a “campaign promise” of posting a pic of me standing on my head if I won. Because I FEEL like a winner, here it is: (remember, there are some things you can’t unsee) 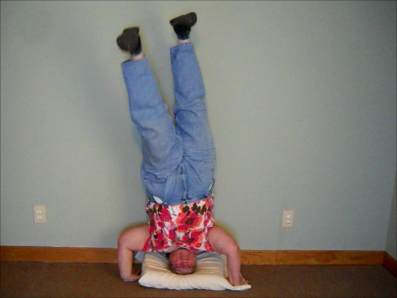 The other four nominees were all good at their respective blogs. I had only known of one of them before this, Grandma’s Briefs. I read her blog and love it. Grampy’s Little Acre,  Painting for Hailey, and Googie’s Attic rounded out the list.

It was a month of begging for votes everywhere I could think of, and no matter how or what I tried, the poll results showed me and Googie’s Attic trading places for first place every day. I said on several occasions that she was a formidable opponent, so I did what anyone would do: I googled her.

Googie is also known as Debbie Noland. She’s a writer from Sedalia, Missouri and author of “The Legacy of Plywood U: A History of State Fair Community College 1966-2002.”  Noland taught writing for 29 years at State Fair Community college.  She also wrote a column for the Democrat (a Sedalia newspaper) called “About Town.”  And she has published a children’s book, “Sweet Dreams: A Bedtime Rhyme.”

A very formidable opponent indeed, considering I didn’t graduate high school because I failed ninth grade English four times. I got my GED when I was in my thirties, though, and went on to Mercer University where I aced English Lit 101, which made my head swell with pride.

Thank you all again for your support!