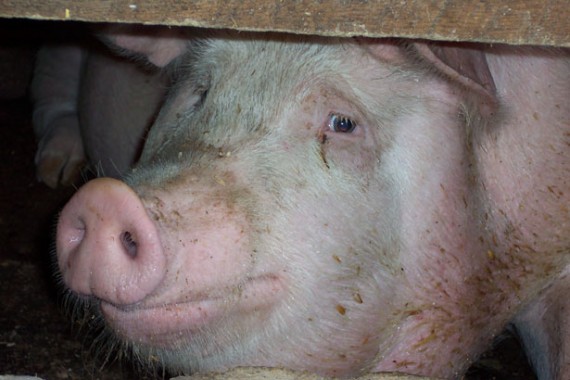 We went to Hillcrest Farms this morning to pick up some New York strip steaks we had ordered a couple of weeks ago. While we were there, we started talking with Gayle, the owner, about pigs. She was telling us how docile the pigs on her farm are, and it made the think about when my father had a pen full of pigs when I was growing up.

We lived in the country, in a little town called Austell, Georgia. Back then, more than 50 years ago now, it really was country. For those of you who live in there now, Thornton Road was a two lane gravel road, and I-20 did not exist when I lived there. Somewhere around 1960 or 1961, contractors started working to build I-20 about a mile or so from our house.

My brothers and cousins and I used to go over there and play on the earth moving machines after the workers went home for the night. What was to become I-20 was just an immense place where they had scraped down all the trees and other vegetation, and then started the work to make it into a road. It was a child’s delight–mud and machines and all.

My father had a pig pen in the woods behind our house, where he  usually had about twenty five or so pigs, fattening them up to take them to market to sell. One day a sow that was ready to have a litter of piglets broke out of the pen, and ran away. Daddy told us to track her down and let him know where she was. When we found her, she had gone through a huge drainage pipe to the other side of I-20 and birthed those babies.

We went home and told Daddy where the old sow was. He gave us a five gallon bucket, and told us to go back over there, and catch one of the babies and put it in the bucket, and run like hell back to the house. Let me tell you, a mama pig WILL chase you all the way home if you have her squealing baby in a bucket.