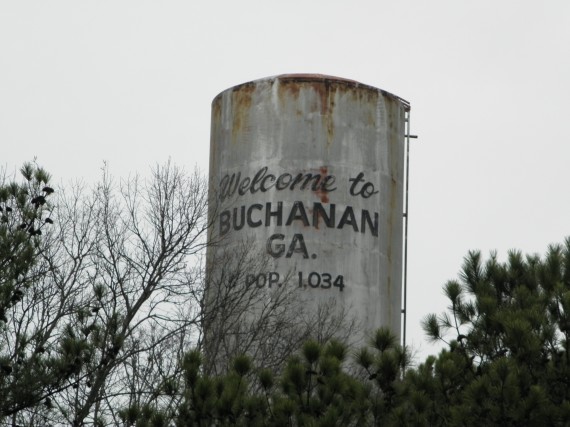 What do the campground at the North Rim of the Grand Canyon; Aunt Jennie’s Restaurant in Waco, Georgia; ReMax Realty in Bremen, Georgia; and our new house in Buchanan, Georgia have in common?

Fabgrandpa and I have been talking about buying a piece of property or a house on 2-5 acres since the winter of 2008-2009. We have looked at houses online for about two years.  Then, in July of this year, we actively made a decision to buy a house this winter in West Georgia. And the stars aligned.

While I was working at the campground at the North Rim of the Grand Canyon in October, there was a couple from Georgia who ch

ecked in, and their reservation was only for two days. On the day they were supposed to leave, they could not get their motorhome to crank. Because all the sites were reserved, it was imperative that they leave, or so they thought. We were able to changes things around, and free up the site they were on so that they could have time to find someone to help them repair their RV.

In the course of all this, the couple and I had the opportunity to chat a few times. Of course, since they were from Georgia, I was interested in how they decided to come out west to visit the Grand Canyon, and they were very interested in how a girl from Douglasville, Georgia could wind up working at the North Rim. They were from Buchanan, Georgia, so I told them that we were going to try to buy a house in that area when we got back to town. They gave me the name and phone number of their friend, Ann Hobbs, who is a real estate saleswoman and told us to call her.

When we got to town, the first house I wanted to look at was on Happy Hill Road in Carrollton. We drove out to the house to take a look at it, and although the yard was beautiful, the house itself was a dump. I called the phone number on the real estate sign for ReMax in the front yard and talked to the agent, Steve Adams, anyway, and that is how we established a relationship with the company. On the day we made an offer on a house and signed the contract, we discovered that Ann Hobbs is Steve Adams partner! If I had called her to begin with, we would still have been sitting in the same office buying a house. Amazing.

This story gets even better. On the one day that we looked at houses before we put an offer on the one we are buying, we stopped for breakfast at Aunt Jennie’s Restaurant in Waco, Georgia. We struck up a conversation with our waitress, Jill. She told us how she and her husband had fallen on hard times, like so many other people in this country, and lost their house that they had lived in for more than eight years. They tried to work with the mortgage company to no avail. We told her we were going to look at a house in Carrollton after breakfast, which we did, but at the time we talked to her, that was the only house we knew about to look at.

After we looked at the first house, I wasn’t feeling that it was the one, so I asked Steve about a different house that I had the MLS number written down on a piece of paper. He said it was also one of his listings, and gave us directions to go look at it. And that was the one we are buying.

Today, we drove up to the house again to check out where the septic tank may be in relation to the house. After we did that, we stopped at the little store down the road. In the store, we introduced ourselves to the people who worked there and told them we were buying the house on Wildcat Road. They told us they knew the people who owned it, and said they were really nice people, and that they still lived in the area. While were standing there talking to the store clerk, a car drove up outside. The clerk said, “That’s the woman who used to live in the house you are buying.”  And when that woman walked into the store, it was our waitress from Aunt Jennie’s! Talk about a really small world!