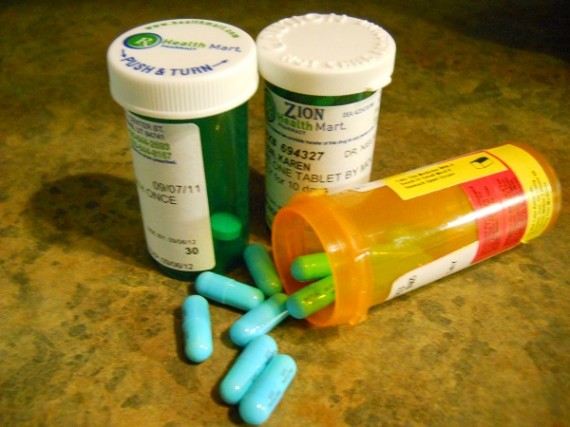 While we were in Flagstaff, I had to go to Wal-Mart to get a couple of prescriptions filled. While Wal-Mart has those great $4.00 prescription prices, it is always such a rigamarole to get one filled at a store in a new city. With that in mind, I went to a doctor in Kanab in May and asked him to write me a new prescription for both of the medications I take on a daily basis, so that I wouldn’t have to transfer my Wal-Mart prescriptions to Zion Pharmacy, and then transfer them back when we were ready to leave the area.
When I went into the Wal-Mart pharmacy in Flagstaff on Monday to just get refills of two medications I had filled there in April, they couldn’t find one of them on their computer. After having my prescriptions filled at Wal-Mart over and over since 2001, shouldn’t they just have me in apharmacy automation system?  Anyway, they couldn’t find one of the darn prescriptions in. Luckily, I still have enough of that particular medication to get me to Georgia and get to a doctor for another prescription.

Really, why the heck do we need a prescription for one month at a time when that medication that I take for my blood pressure and for my type II diabetes are both things my doctor says I have to take for the rest of my life? So I question why I have to get new prescriptions every six months, and why the pharmacy can only fill it for 30 days at a time. I can understand why someone with health insurance can only get 30 days at time–heaven forbid that the insurance company have to pay for more than a month in case you die before the next month. But when I pay out of pocket for it, they should be able to fill it for the full six months if I want to pay for it.

Shouldn’t stores like Wal-Mart that are all over the place be conveyors of our prescriptions? I think they should move them from one place to another automatically once they have us in their system. I don’t think I should have to remember which store I had it filled in last for them to be able to find it. I mean, really.