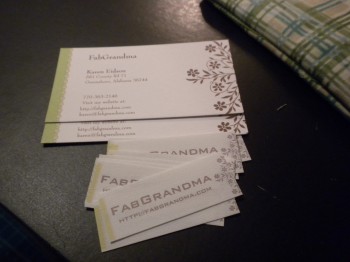 I have had that style of business cards for a couple of years, but I have been wanting some labels for the things I have been making.  I have been participating in the “I Made It” blog carnival from Everything Etsy for a few weeks, and last week, I found a girl who makes iron in labels through there. I don’t have an Etsy store, (I used to, but now I just have my little shop here). I DO buy supplies on Etsy, and have been very pleased with everything I have found there. So, I chit chatted via email with Marcia from Beautiful Blooms, and today, I received the labels that match my business cards. How cute they are! Now if you purchase any fabric item from my shop, it will have one of these labels in it, so you will have a “FabGrandma” original! Woot~!   If you want labels, you’ll have to convo her.

So, today was the day for me to go back to the doctor for him to go over all the lab tests he ordered last week. And there is nothing wrong with me. Or so the lab results say. No rheumatiod arthritis. No lyme disease. No nothing. At least nothing that he could find by looking at my blood that could indicate why I was in so much pain up until last week, and at other times in the past. He asked me if the medications he gave me last week worked, and I told him they did. So, he wrote me a prescription to keep on hand for when it happens again. Because I was about to cry, asking him “what if I get in that bad of shape again and I am in Arizona at the Grand Canyon?”  He said it could be osteoarthritis, or it could just be inflamation. He couldn’t offer any other explanation than that.

He did  X-ray my pelvis to see if he could see anything abnormal about my hips that would cause them to hurt so much. He said he would call me to let me know if he sees anything there. And I am having them make copies of my medical records to take with me, just in case I have to go to that doctor in Flagstaff again. I can’t help feeling a little disappointed that they couldn’t name my enemy. At least they gave me a weapon to use to fend it off.

One thing about feeling not well, is that I haven’t been cooking as much as I usually do. I didn’t say we haven’t been eating much, hahaha.  I have always been one of those cooks who wants to make things from scratch as much as possible. Like when I make chicken and rice, I have always cooked the chicken, picked off the meat, and then made the rice, etc. So, I have been using canned chicken instead, and premade chicken broth. And guess what? It tastes just as good, and takes less effort to make. And I can store the chicken in the pantry instead of taking up room in the tiny freezer.  I am going to be doing that more often. The added bonus is that I have more time to do things I want to do, like sewing. Yeah. Sewing…..