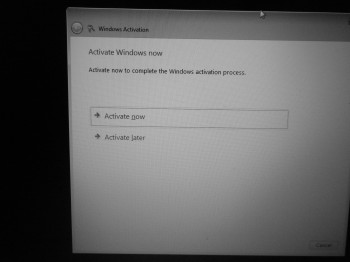 On Tuesday, I turned on my computer just like I always do in the morning to read my email while I have my coffee. Only my computer didn’t boot up all the way. I got an error screen that prompted me to “Activate Windows Now.”

I have been using this computer since June of 2008. It is a Sony Vaio that came with Windows Vista Home Premium pre-installed. I don’t know of any ready to use computer these days that doesn’t come pre-loaded with some version of Windows, unless of course, it is a Mac.  So, when I was prompted to enter the product key, I copied the key from the bottom of the computer, and typed it in the space provided.

And I got an error  that said “The product key you have entered is invalid.”   And in the bottom right hand corner of the screen, it said “This copy of Windows is not genuine.” That was the beginning of “Technical Support Hell ” here in the Fab household. 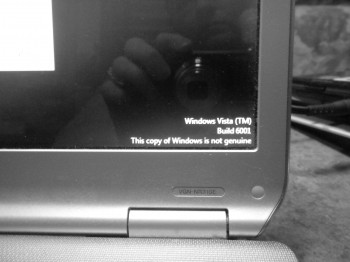 You would think that because Windows is a Microsoft product that Microsoft would be responsible for assisting you if you have a problem. After searching the Microsoft support pages for a couple of hours, looking for help with my particular problem, I finally found a telephone number to call.  Now, I know it’s not Microsoft’s problem  that I am in a remote area, and have only 1 bar on my cellphone, and if I don’t hold my head just right, or move the phone 1/100th of an inch I will lose the call.

When I called the phone number, I described in detail what my problem was, and was told that I would have to call Sony. So, I called Sony. After holding in cue for thirty minutes, I reached someone at Sony who told me that my problem was with Microsoft, and gave me a different phone number to call. But, they told me if I wanted to pay $49 for technical support, they would help me. I said no thanks, and hung up.

I dialed the new number and was greeted by an automated recording that asked me several questions, and finally got me into a holding cue for a technical support person.  This person at Microsoft went through several steps with me to diagnose the problem, although I already knew what the problem was—I needed a new product key to activate windows on my computer that is the same computer I have been using for two years. After about half an hour on the line with the technical support person, he said I needed to be switched over to the “Activation Department”. He put me on hold, and before the Activation Department could answer my cellphone dropped the call. Sigh.

FabGrandpa and I decided that we needed to go to Tuscaloosa and buy a back up drive. Just in case. I have been owning computers since 1994, and have never had any means of backing one up before. I should have, but just never did.  On the drive up there, he suggested that I call my son and ask him if he knew what to do. But I said, no, I don’t think he’ll know.

By the time we got home from our shopping trip, it was late and I didn’t feel like going through the hassle again that day. So, on Wednesday morning, I started calling again. I got someone on the phone at Sony, and asked for the Activation Department. They person on the phone asked me what the problem was, so I explained it. And they said, you need to speak to the Activation Department. When the person in the Activation Department answered, I went through explaining the problem, again. And they said, “Your computer is out of warranty—we can help you with this problem, but we will have to charge you $49 to help you. And I said, “NO.  I am not going to pay $49 for something I have already paid for. All I need is an activation key, or product key, for the Windows that came with the computer.”  The person at Sony told me that the only way to correct the problem without paying them $49 was to use the Recovery Disc. If you know anything about Recovery Disc, you know dang well that it doesn’t recover anything. It wipes everything off your computer and puts it back like it came out of the box. No. Thank. You. I am not going there.

As I hung up, I could feel my blood beginning to boil. Isn’t it enough that these computer companies have us over a barrel when it comes to buying the products? Do they really have to suck our pockets dry for every little thing? I refused to pay because I knew there must be an answer somewhere.

I called Microsoft back, and waded through the recorded prompts again. After about an hour, I got a real live person, and explained the problem yet again. She was less than helpful. After going through several more diagnostic steps, she informed again that this was Sony’s problem because the software was preloaded on the computer when I bought it. Sony bought the license from them, so it was Sony’s responsibility to provide me with the activation key. I told her in no uncertain terms that I expected Microsoft to support their product and I didn’t care who bought the license. And she informed ME that the only way Microsoft would help me was if I paid them $59. I just hung up in disgust. Doesn’t Bill Gates have enough money yet???

And so, I decided to call my son. And he told me what to do. And the advice he gave me worked. I should have called him first.