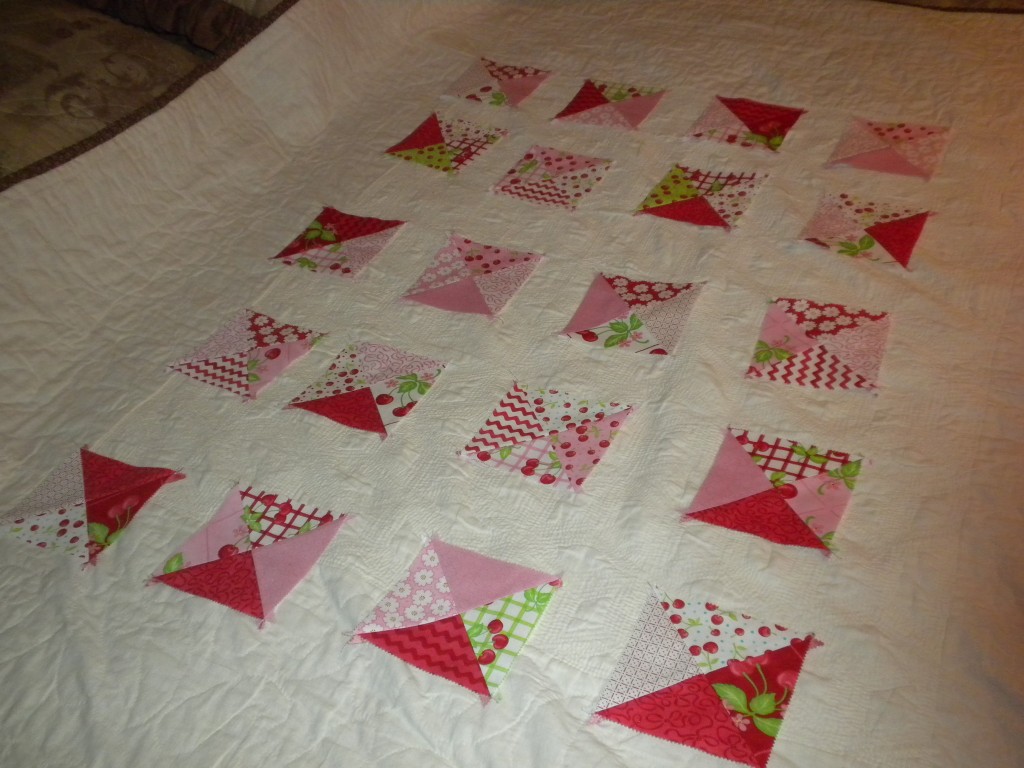 These are the blocks, all laid out on my bed so I can see how they look together. I still need to sew the sashing and borders on. I am loving it! I tried to lay them out approximately as far apart as they will be with the sashing strips. I go in the bedroom and sew when I get frustrated working on the website. Yes, still working on it, tweaking things, and getting the FabGrandma Reviews side of it working. It is easier getting the review one done because of all the things I learned while doing this one, but it is still a pain in the part I sit on!

We had to go to Tuscaloosa again on Monday for yet another appointment for FabGrandpa. The VA is checking every part of him, one thing at a time. This is all good, but dang, it is soooo time consuming. He is scheduled for a colonoscopy next week, then another appointment at the end of February for the doctor to give the results all the tests.Then another appointment with an eye doctor for another test.  I think Fabgrandpa gets a diploma when he has the last test, ha ha ha ha!

On Tuesday, we went to Greensboro to get new batteries for the truck. It has been taking several tries to get it to crank on cold mornings, and after thinking about it for a minute, we decided that we got the existing ones when we were working in Texas, so that would make them six years old. No wonder they are worn out. So, $207 later, she’s cranking up on the first try every time.

Also, while we were in Greensboro, I asked around to see if they had a food bank, and they do, at the local Habitat For Humanity office. I went in and talked to them about what I items I had to donate, and they referred me to a woman in town who is on a gluten free diet and would be glad to receive them. I’m going to meet her sometime next week.

I finally got a direct deposit I was waiting for this week. It was supposed to be here the first week of January, and I have called several times over the past few weeks trying to find out what the problem was. They finally figured out what the holdup was, and I saw the deposit in my account yesterday morning. So, I could finally call the airline and get a ticket for FabGranddaughter Sarah to come to visit us in March on her spring break. I can not wait! She’s flying to Atlanta, where we will pick her up and go to our hometown. Her dad, step-mother, brother (the FabGrandson Michael), and half-brother (the FabGrandson Owen),  are all coming from Maryland. We’ll spend a week in a motel, doing fun things. It’s going to be great!

Oh, if you want to win a gift pack from Maniszhewitz, go to FabGrandma Reviews and make a comment. I’m giving away three prizes. The products are kosher and gluten free, but they taste really good. Anyone would love them. Sorry, United States residents only.