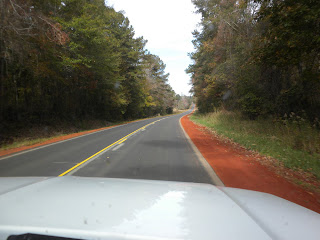 We set out the other day to go see Alabama, to find our way around our new neighborhood. They had recently scraped the sides of the road, and that orange dirt was showing on the shoulders. For some reason, I found this to be quite lovely. 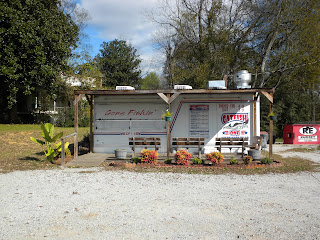 We drove through the Talledega National Forest along County Road 50, and came out in the little town of Moundville. This tiny restaurant was on the corner of County Road 50 and Hwy 69. They are open on Thursday, Friday and Saturday and have what else? Catfish, on the menu. They also have shrimp, oysters, and other seafood. They were closed the day we were there, but we put them on our list to try before we leave the area. 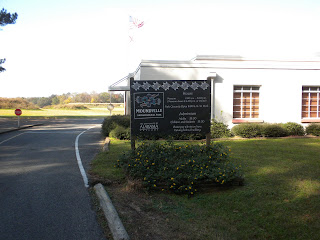 Just off Hwy 69 is Moundville Archaeologic Park. This area was inhabited by Mississippian Indians 800 years ago. They built the mounds here along the Black Warrior River. Archaeologists studying the area don’t know why the Indians built the mounds, or why they left. These early inhabitants left behind lots of pieces of pottery and other of their handicrafts, but, alas, the museum was closed for renovations so we did not get to see them. We are planning to go back in a couple months when it opens up. 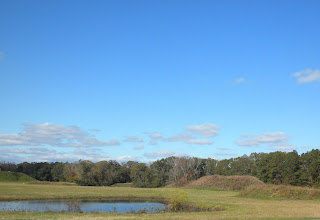 There are about 15 mounds there in all. Two of them are larger than the others, and were probably where the chief or religous leaders lived. 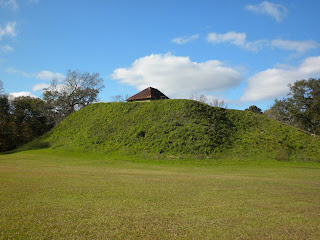 The holes where the dirt was dug out to build the mounds became man-made lakes, and the Indians probably used them as fish farms, growing fish to feed the village. They were farmers, too, growing squash, corn, and beans among other things. 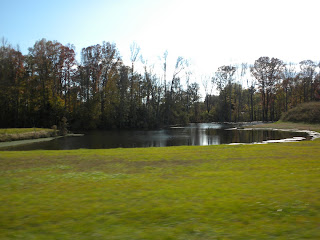 We drove down to the Black Warrior River, where there is a picnic pavillion, a conference center, and restrooms.  A small outdoor Indian village replica was there but it wasn’t open, either. 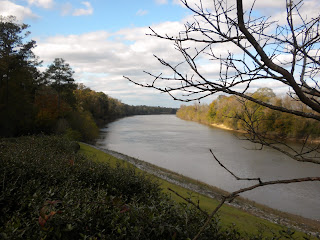 The park charges $5.00 per person admission, and was an interesting stop for the day, but it would have been better if the museum had been open. There is a small RV park, with full hook ups on the property. Sites cost $12 per night, but it was not clear where you go to register and pay. Call ahead to get more info before you go. I wish we had.