Hide Search
Share
Tweet
Pin
Share
0 Shares
In the two years that we have been living and working on the Kaibab Plateau, we have never driven up Hwy 67 from Jacob Lake in the dark, until last week when we came home from the emergency room.  The closest we came was when we drove up around dusk one time and counted 105 deer.  Those deer were way off in the meadows, close to the trees. Not right on the road.
I was pretty well drugged up that night last week, so I COULD have been hallucinating, but dang! there were HUNDREDS of deer out there, just hanging around.  It was very creepy to see them, those animals that look so cute in the daytime. See: 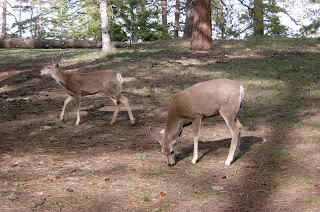 But the other night they were standing in groups, herds, of probably 20 or 30, on both sides of the road, along the 43 mile drive.  When our truck lights hit them, they seemed to turn in unison to look at us, the light reflecting from their eyes looking all red and evil. I told FabGrandpa it was like they had called a meeting to discuss taking over the world!  It was sort of like that old Alfred Hitchcock movies, “The Birds”, except this was mule deer.

And as if that was not enough creepyness, we saw two cows standing on the side of the road about half way up the road. They were the weirdest looking cows I have ever seen, but of course it could have been the drugs.  I only wish I had taken pictures. But it was dark. And I was on drugs. They sort of looked like this:

only they seemed to have a larger, shaggier body.  And a smaller head. And shorter legs. And they looked really scarey in the dark.