This weekend the only thing I had planned to do was a dinner party for about 10 people. Yeah, I’m sorta crazy like that, who in their right mind would plan a dinner for 10 when they live in a travel trailer??? The menu included Mexican Seafood Soup, avocado slices, corn tortillas, and cantaloupe and honey dew melon. My friend, Kathie, brought home cooked mini bread loaves for those who eat wheat. 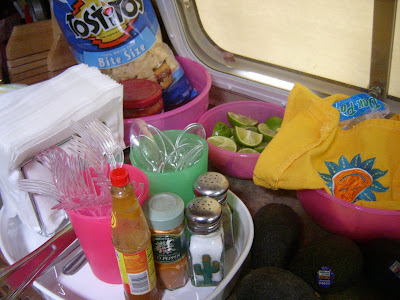 (ready to go outside to the picnic table)

I spent the day on Saturday doing nothing, and I do mean nothing. I laid on the sofa and read a book, one by Debbie Macomber, which is like junk food for the brain. Chatted with some friends on Facebook. Went out to sit by the campfire with my neighbors for a bit right before dark. 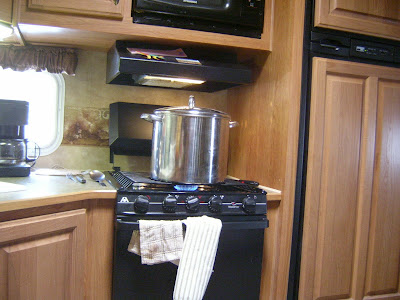 (a huge pot of soup)

This morning, I got up, wrote down my recipe (it’s on my hard drive but I didn’t feel like messing with my printer). It is a wireless and sometimes it won’t talk to my computer, so writing down the recipe was faster. After that, I gathered up all the indredients and put them on the counter, ready to go. Chopped jalapenos, celery, onions, garlic. Peeled carrots and potatoes. Everything was ready. I made a HUGE pot of soup. 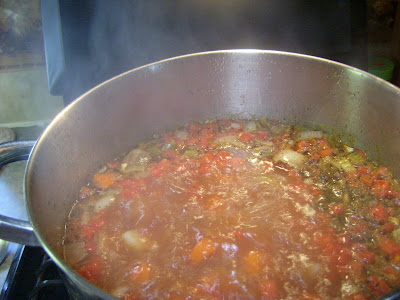 In between the gathering and chopping, I went out to do laundry. Got everything washed, dried, folded and hung up, in less than two hours. When I got back to the trailer, the phone rang, and it was my cousin, Susan. I have never met her, but I have talked to her on the phone several times. She is coming to visit me tomorrow. I am very excited about that! Susan’s mother, my mother’s sister, died when Susan was 12 and she was sent to live with her paternal grandparents in Oklahoma. She never saw her mother’s family again until the last year.

In December of 2007, I was invited to be a guest blogger on a blog that is no longer in existence. During the time that I was trying to figure out what to write, I went to my mother’s 80th birthday party. So, I decided to write about my mother’s life. I started out talking about my mother’s parents, and mentioned her maiden name in the article.

That maiden name is not a common name, and my grandfather’s last name was the only last name Susan knew to search for after so many years. She and her husband had googled and searched for that last name many times over the years, with no results at all. The weekend after I posted my blog post at that other site, they googled again, and were very surprised and excited to finally get a hit on that last name.

The article included some pictures of my mother when she was young, and in the picture I chose, she looked very much like her sister, Susan’s mother. There was a link from that article back here to FabGrandma, which Susan clicked on and found enough information to find my mother’s telephone number in Georgia. The rest is history. Susan and her husband travelled from Missouri to Georgia to meet my mother last summer.

So, now, after all these years, I will meet my cousin tomorrow here at the Grand Canyon. I am very much looking forward to getting to know her a little bit. She credits me with finding her family and is very happy that I wrote that article. I’m sure I will have some pictures to post tomorrow.

The party tonight was so much fun, hanging out with the folks I work with, laughing, talking, having a beer or two. We stayed outside at the picnic table until after sunset, just enjoying each other’s company. Ahhhhh, isn’t life Grand?