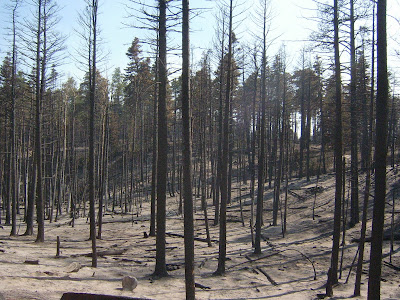 The photo above is from the Aspen Fire on the North Rim of the Grand Canyon. It was started on July 29 by a lightening strike. It has burned more than 4,000 acres to date. If you click over there to read more about it, look at the map. I live about where the little circle is where it says North Rim on that map. 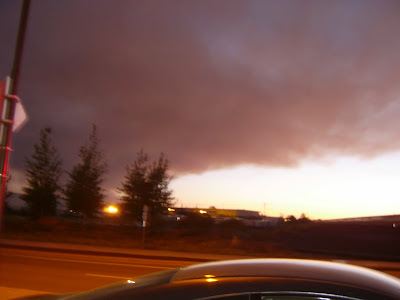 And this photo shows the smoke in Flagstaff last Sunday night, coming from the Taylor Fire, 13 miles away in the Coconino National Forest. The cause of this fire is still under investigation.

Both of the fires above have burned large areas, one in a national park, the other in a national forest. The fire crews have worked hard to keep them contained and under control.

When I was a little girl in the late 50’s and early 60’s, my parents left me and my brothers at home unattended while they worked. In summer, we had the run of the woods and the neighborhood, which was very rural back then. My father raised pigs for sale at the stockyard in Atlanta. He picked up the garbage from several restaurants about three times a week to feed his small herd (is that what a group of pigs is called???) of pigs.

The Agriculture Inspector from the state of Georgia came around, and inspected the feed about once a month. Sometime in the early 60’s, he instructed my father to “cook” the slop to a certain temperature before feeding to the hogs. So, my father had a cooker made. This cooker was made from two 55 gallon barrells, sliced in two pieces lengthwise, and welded together end to end. One half was attached to the other with hinges, to make a large kettle with a lid. This was on legs about two feet off the ground.

While our parents worked, my brothers and I had the chore of building a fire under this contraption, and keeping the fire burning for two days each time. We used old tires for the fuel, which gave off huge billows of black smoke. As you might know, we didn’t pay very close attention to that fire. We were kids, after all.

My oldest brother was about 11, I was 9, my younger brother was 8. We were so busy playing, that we did not notice that the fire had spread from under the cooker into the woods. We did not know what to do. I don’t think any of us even knew how to use the telephone, or who to call. I ran up to the road, trying to figure out what to do. The first vehicle that came by was a van. I don’t know what the man driving it was selling, but he had lots of burlap bags in the back of that van.

He ran into our house and called the fire department, then got a handful of those burlap bags out of the van. He wet them all down with the hose, and went with us to the fire. We all used those wet bags, slapping them at the flames to put the fire out. I don’t know how many acres we burned, or how long it took to get the fire out, but I can remember how mad my father was at us for letting the fire get out of control. I can not imagine something like that happening today, with just a bunch of kids in charge.

Oh the 4th of July, I met Smokey the Bear when he came to the Grand Canyon for the open house at our Emergency Services building. He gave me a can cozy with his picture on it: 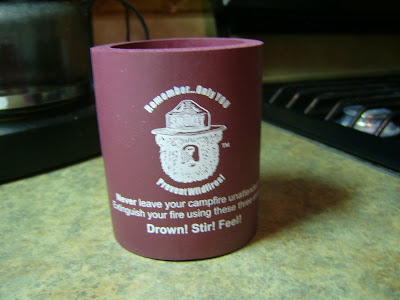 DROWN! STIR! FEEL!”
If you would like to win this cozy, leave a comment or send me an email (fabgrandma at gmail dot com), telling me your fire story. Whether it is a campfire, a kitchen fire, or a forest fire, tell me about it. I’ll pick a winner at random on September 1. You’ll get this cute cozy as the prize.
And remember, Only YOU can prevent wildfires!
Share
Tweet
Pin
Share
0 Shares