Hide Search
Share
Tweet
Pin
Share
0 Shares
Back in 2007, I found a recipe for Chicken Corn Chowder, that I thought was pretty good.  However, it was a somewhat complicated recipe, and I have never made it again. 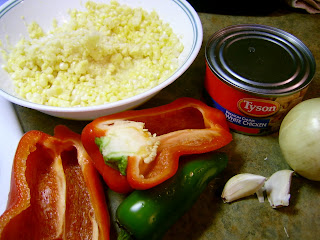 Tonight when I came home from work, I realized I had not set anything out of the fridge for dinner, so I needed something I could throw together quickly, with things I already had on hand. One of the things I had on had was 3 ears of corn, that needed to be used today.  After poking around in the cupboard, I found enough things to make a pot of Chicken Corn Chowder that is just as good as if not better than the previous one and was way easier to make.  And that canned chicken made it a snap to prepare.

Peel, dice and cook the potatoes in a small boiler until soft, drain.  IN a dutch oven, heat the olive oil, then saute the peppers, onion, and garlic until soft. Drain the chicken, but save the juice. Add the chicken to the dutch oven, and continue to saute for a few more minutes. Add milk, chicken juice, salt and pepper,potatoes,  and corn to the pot. Cook on medium low heat until thickened. Add 2-3 tablespoons of corn starch if needed to thicken the soup.   Serve with buttered toast or cheese toast. Mmmmm, goood! 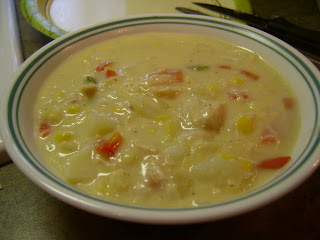