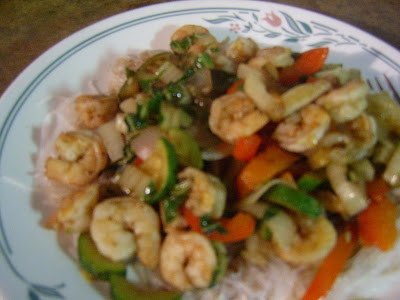 When we were in Flagstaff last week, I bought a refrigerator full of veggies, including some bok choy. I have never bought or eaten bok choy before, that I know of, but it always looks so good in the store. So, when I got home tonight, and wanted something quick and easy to cook for dinner, I thought about that bok choy in the fridge. 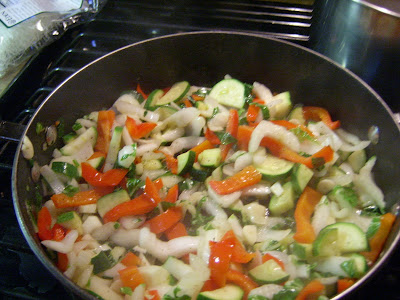 I also had a bag of raw shrimp in the freezer, so I decided to make a shrimp stir fry. To make this, I used :

Heat a couple tablespoons of olive oil in a skillet, add all the chopped veggies, and stir fry until they are done to your liking (I cooked mine about 7 minutes). Add some salt and pepper, a couple of shakes of some gluten free soy sauce, and 1 pound of shrimp, peeled. Stir and cook about 5 minutes more, until shrimp is done.

I served this over bean thread noodles, with more gluten free soy sauce. It turned out very good. FabGrandpa said for me to put bok choy on the shopping list more often.