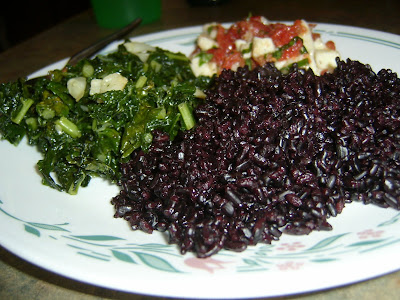 We drove up to Yarnell on Sunday afternoon and spent the night with Gaelyn, of Geogypsy because FabGrandpa had an appoinment at the VA in Prescott for his physical and yearly bloodwork. More about the trip tomorrow, but tonight I want to tell you about this yummo meal.

While in Prescott, we went to the Frontier Natural Foods store. Among other things that we bought, we got some Forbidden Rice and some lacinato kale. I have been reading about the forbidden rice on some vegetarian and gluten free forums that I read, and have been wanting to try it. But because it is relatively expensive, I didn’t want to buy a one pound bag of it and then find out we didn’t like it. To my delight and surprise, the bulk food section had some of it and also some Red Bhutanese rice. I got about a cup and a half of each one.

Our dinner tonight was the black forbidden rice, kale sauteed with garlic, and a nice tomato-fresh basil-fresh mozzarella salad. The rice was very good. It was not at all like the black wild rice, which I really don’t like. It took a little longer than white rice to cook, about thirty minutes. The flavor was a little bit “nutty”, but mild, and it had a little bit of “chew” to it, not exactly like al dente, but not as chewy as wild rice. We will be buying some more of it.

To cook the kale, I sliced it about a half inch thick in shreds, and steamed it for four and a half minutes in the microwave. Then I peeled and sliced up about half a head of garlic, and added it to about four tablespoons of olive oil in a large skillet. When the garlic had cooked for about three minutes, I added in the kale and sauteed for about four more minutes. Salt and pepper to taste, and it was done. The kale was still a little chewy, too, but I think that really made up for there being no meat in this meal.

The salad was made up ahead of time, and refrigerated. It was the other half of the head of garlic, diced up; a ball of fresh mozzarella, diced up; a can of diced tomotates drained, a few leaves of fresh basil cut up, salt and peppr to taste; and about a 1/4 cup of olive oil. Mix well and refrigerate for at least an hour.

Tomorrow I am going to try the Red Bhutanese rice with some pork shoulder steaks. And then I’ll tell you the rest of the story about our trip to Prescott.

Forbidden rice may not save you from getting a mortgage bond.  But it will make you a favorite with everyone in your house.