To celebrate FabGrandpa’s birthday today, we went to Parker, Arizona. We had a little business to take care of first, then we ate lunch at El Serape’ Mexican restaurant. They had the best corn tortillas I have ever eaten. They weren’t mushy tasting and wet like a lot of corn tortillas are. When I paid the bill I told them how much I liked the tortillas, so they sold me a bag of them for $2.50. I was so excited that I found something I can eat that tastes so good and that they let me buy some to take home. 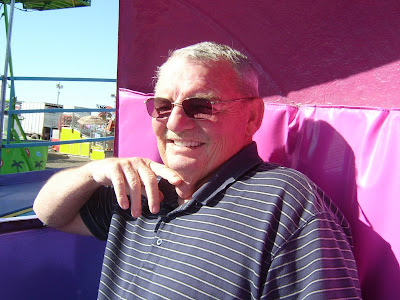 After lunch, we went to do laundry, then to Basha for some veggies. We wound up spending $65 at Basha, but we got cauliflower, broccoli, brussels sprouts, tomatoes, mushrooms, green onions, lettuce, avacados, bananas, strawberries, grapes, green beans, and asparagus. Two cases of water and coffee and we were out of there. So, for what we got for the money we did pretty good. 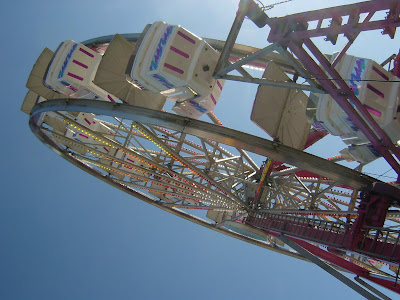 Then as a treat, we went to the fair! I can’t remember the last time I went to a fair, and he said he doesn’t think he as been to one since Becky was a little girl and she is, ummm, 34. 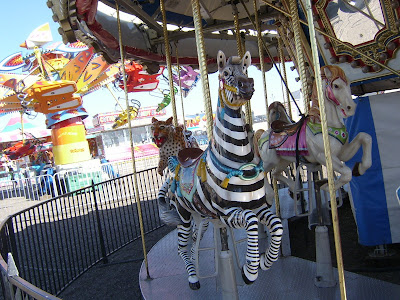 I love the animals of the carousel, they are always so pretty. I especially liked this zebra. 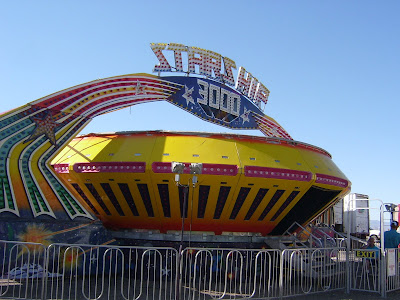 Yeah, he tried to get me to ride the Starship 3000, but I am not completely crazy. The last time I got on one of those things I was really sick, and the other riders were not happy. Besides, who in the world thinks that something like the spin cycle on a washing machine could be fun??? 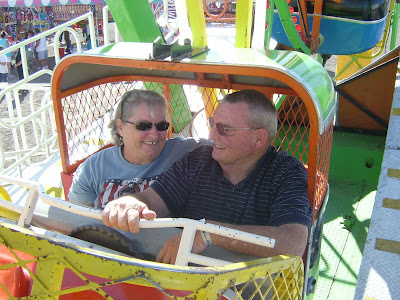 I don’t remember the name of this one, but it looks like a Ferris Wheel except that the bucket you are in twirls around and upside down. We got in it, but changed our minds before it started. I think it was a good decision. 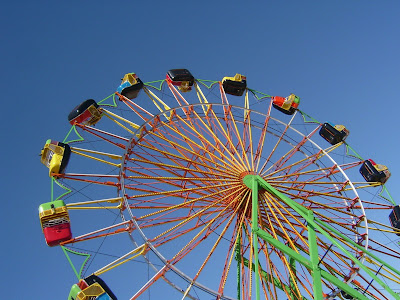 Here it is from the ground looking up. See those little space capsule looking things. Yeah, right. I’m glad I didn’t do that. 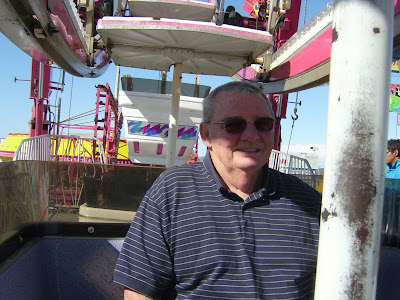 This is the more dignified, real and true Ferris Wheel. It was just the right speed for us old folks. 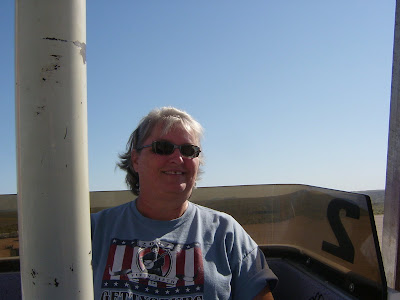 And here I am, with my new longer hair and shades. I got sunburned on my face because the sun was out and not a cloud in the sky. 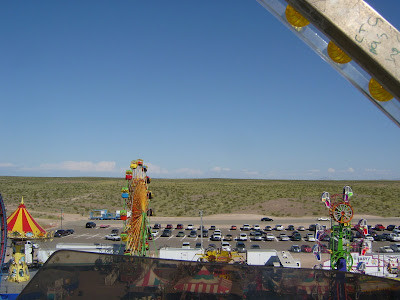 Well, except for way over there on the horizon. This is the view from the top of the Ferris Wheel. They held this fair out in the middle of the freaking nowhere desert. Way out from town. I wish we could have gone at night, I’ll bet the lights are really pretty out there. But is is more than 50 miles over there so… 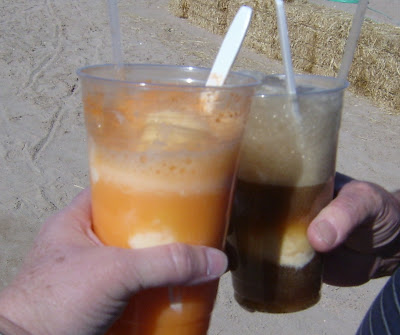 Oh, and there was lots of “fair food”, but since we had already had lunch the only thing we got were these: An orange cream soda float and a root beer float. It was the first thing we did. And after we rode that Tilt-A-Whirl, we were both wishing it had been the last thing we did. Riding that thing was sort of like taking just one toke too much, or one glass of wine too much, (so I am told, as I would NEVER know for sure just what that feels like.)