That gluten I got in those daily vitamins knocked me on my hiney. I am finally feeling better, so maybe I can catch up with everything. And I finally had a phone call from the manufacturer of them, telling me which one of the pills in the daily pack contains the wheat, the B12 tablet. I let them know how sick it made me but they offered no compensation. I don’t know yet if I am going to continue taking them without that one pill or not. It does seem like a waste of money not to, but FabGrandpa may take them if I don’t, since the gluten does not bother him.

I was planning to give a recipe a day from the meals I was making this month, but for the last few days, it has been simple simply prepared basics. You know, roasted chicken thighs, mashed potatoes, steamed broccoli, stuff like that. So what I will do is just put up the dinner menus since Saturday. Yeah, boring, I know. But the last time I talked about cooking here was last Friday when I made that Mexican Seafood Soup. So, here is what we have been having: 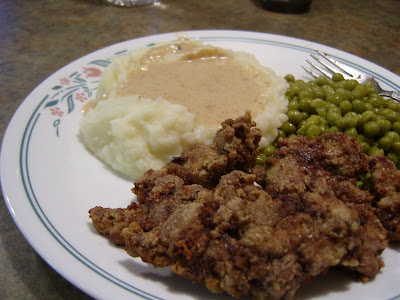 Chicken with Salsa and Rice (Thanks to my mother-in-law for that recipe!)

We are doing really well on the overall budget, too. I stopped doing the Cash Monday posts, and several readers have asked me about that. It was just so boring to write about after we got out here to the desert, because there is no where to go to spend money. We haven’t even taken money out of the bank some weeks because there was no need to. So, my suggestion to anyone who wants to stick to a really tight budget? Move to the middle of nowhere, only go grocery shopping once a month or less, and stay out of stores. You’ll do just fine.

I have to give a little more info about those yummy Gluten Free Fried Chicken Livers. Years ago, when all my children were young, they all loved fried chicken livers as much as I do. Now, I know liver is not something that everyone likes, but my family did. I used to cook more than was needed to feed us all, so I would have some to take to work with me for lunch the next day. I had to hide them in the back of the refrigerator so my children would not sneak downstairs and eat them in the middle of the night. More than a few times I didn’t hide them well enough and had none to take for lunch. So I have weird kids!

After I made my chicken livers on Monday, I called Becca, my daughter, who is also a gluten free girl, and told her how good they were. She was really excited to hear about it and said she was going to make some, too.

For anyone who would like to know how to make them:

Drain and rinse the chicken livers. Dredge in the Bob’s Red Mill Baking Mix. Melt the Crisco in a skillet, and let it heat up on medium heat. Place the breaded chicken livers in the hot oil, cover and let cook for two minutes. Remove the lid, turn the livers over, replace the lid, and let cook another two minutes. Remove the lid, turn the livers over, and resume cooking without the lid for about three minutes more. Turn again, and cook on that side for another three minutes. Remove from skillet and drain on paper towels. Repeat until all the livers are cooked.

To make the gravy, drain off all but about 4 tablespoons of the Crisco from the skillet. Add about 1/4 cup of the Bob’s Red Mill Baking mix, and stir well, cooking until the mix is browned, about 2-3 minutes. Add 2 cups of milk (any kind of milk will do, cow, soy, hemp, almond). Stir and cook until thickened.

I was sooooo in Georgia Girl Heaven!!