After sitting here in the desert with not much to do since the end of December, things are starting to hop here at the Fab household. This week, I received my paperwork from the dream job to fill out for going back to work. I also had to go to Parker, a 100 mile round trip, to get fingerprinted. I had to do this last year, too, and I think it is too funny that I, a gray haired old grandma, has to go to the sheriff’s office to get fingerprinted for this job. But off we went to take care of business. While we were there, I also stopped in at the DMV to get the date of birth corrected on my drivers license. So, now after only 40 years, I have a correct drivers license. Yay!

We have booked a room in Imperial Beach for our long awaited vacation at the beach. Yeah, we live in a travel trailer, and camp all the time, so when we do take an “official” vacation, we stay at a motel. This particular place, The Seacoast Inn, is a special place for us. It is where we stayed for our first vacation together in 1994.

We still lived in a house in Georgia at that time, and I was still working at a “real” job. I took 17 days off, and we drove from Atlanta to San Diego and back, spending 5 days at the beach. Our reservation was for a swanky hotel in La Jolla, that said in their brochure that they had a “beach view”. Well, they did, IF you stood on your tip toes and leaned over as far to the left as you could, you could see a little bit of sand from the room. I was so disappointed with that.

The first day we were there, we drove down to Imperial Beach, which is where FabGrandpa grew up. And right there on the beach where he spent his childhood, was this incredible little inn, very intimate looking, and quaint. They had been closed for renovations and had just re-opened that day when we showed up. We booked a room there for the remainder of our stay, went back to that crap hole in La Jolla, and moved down there. It was so nice. All I had to do was open my patio door and put my feet into the Pacific sand. This is one of the highlights of our first trip there. I took this picture from our patio: 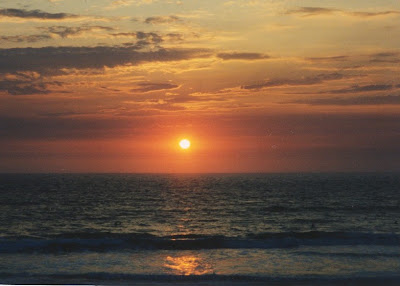 Then, in 2004, ten years later, we went back for our summer vacation. We emailed all the kids, and gave them a link to the inn’s website, and told them, “If you want to come and meet us there, here is the website and the dates we’ll be there.” Three out of the four of them showed up, and we had so much fun! We went to Old Towne, the San Diego Zoo, downtown San Diego, Tijuana, and just relaxed on the beach. The grunion were running while we were there, and our grandson, Michael, who was 7 at the time, had a blast staying up til 3 in the morning, chasing little fish on the beach with a flashlight. This is my favorite picture from that vacation. It’s Michael holding a lobster he and his Dad caught on the pier: 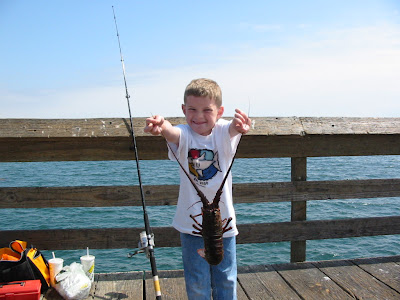 The sad part is, this will probably be the last time we get to stay there. They are tearing it down after this summer, and building a new hotel. I don’t know if they are going to rebuild in the same style of little suites with kitchenettes, or not, but I hope so.

Then, as soon as we get back from San Diego, we will be moving. I have made a reservation for a month at a campground on the other side of Wickenburg from where we are now, about umm, maybe 85 miles east of here. The rent is a little cheaper than it is here, and the electricity rate is 11 cents per khw, as opposed to being 18 cents per kwh here. And it is beginning to be hot here: today was 90 degrees. We’ll need to run the air conditioner more, so that difference in the electric rate will make a big difference.

We’ll also be closer to town. We have enjoyed being in a remote area, but I am ready to be closer in. Being 85 miles from Wal-Mart and 55 miles from a decent grocery store saves you when you need to stay on a budget, but it can get pretty old. Yeah, I said it! I am tired of this place!

Another “booking” I have made is an appointment for FabGrandpa to get his annual physical at the VA Medical Center in Prescott. And to answer the question I know must be on The Original FabGrandpa’s, my father-in-law’s, mind at this point is “No, there is nothing wrong, he just needs to get his bloodwork done for his thyroid medication.” We usually do this at the doctor in Atlanta, but since we didn’t go to Atlanta this year, he is going to the VA to take care of that. And because he has never been to this particular VA facility, they are going to do the in depth “intake” physical. Everything from looking down his throat to a finger in the Whooo Hoooo! He should have a lot of fun that day.

So, Prescott is about a two hour drive from where we will be at the time of his appointment. We’ll go up and spend the night with Gaelyn of Geogypsy, then go for the day in Prescott. There is a health food store there where I can find some of the things I can eat, as well as my dishwashing liquid.

This last month before starting back to work is going to be busy. I’ll probably also do my annual cleaning out of things we don’t need. I hate to do it, but it has got to be done. Everything that comes in weighs us down, and we sure don’t need too much weight when we go back over those mountains towards Flagstaff!