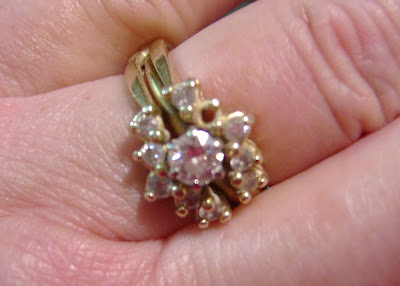 When FabGrandpa and I first got together, we lived together first. We had both been married twice before and while we knew we wanted to be together, we were scared to take that final plunge so soon. We did plan to get married but had not set a date yet.

Then, when he had been living with me for about six months, he and his daughter were in a bad auto accident. He had a broken hip, five broken ribs, two ruptured discs in his neck and a concussion. He was in the hospital for thirteen days, nine of it in intensive care.

The day before the doctors let him go home, he had a very serious talk with me. He was worried that I would not want him to come home to my house to recuperate. I thought it was odd of him to even ask, because I loved him and couldn’t imagine him not coming home there. I told him he could, but that we needed to get married. The day that the wreck happened, the people at the hospital wouldn’t allow me to go in to see him in the emergency room because I was not his wife!!! So, as soon as he was able to stand up without support, we got married. Our first rings were gold bands we bought at Wal-Mart.

He was not able to return to work for almost two years. One day while I was at work in Atlanta, the attorney called me and said he had a check for us from the other guy’s insurance company. I went to pick it up. It was a large check, the largest one I have ever held in my hands! When I got home, I gave it to FabGrandpa, because it was his money and the check was made out to him.

The next day, when he picked me up from the park and ride lot, he gave me these wedding rings, and every penny of the rest of the check. To me, it was the nicest thing anyone had ever done for me. Even though we both considered the money to belong to us both, he made that elegant gesture of giving me everything he had. And that is what makes it so sad for me to know that I have lost one of those precious diamonds. It is worth the world to me.