A few months ago, while we were in Flagstaff, I decided to look for a dishwashing liquid that would be better for my hands. We had been using Palmolive for years, and it had been the best one I could find to prevent the itchyness, but even that was not working for me anymore.

Yeah, I COULD just wear gloves, but even though I had bought some, I can never remember to put the dang things on until AFTER I had my hands in the dishwater. Have you ever tried to put rubber gloves on wet hands??? Not happening, friends.

So, anyway, we were in the health food store in Flagstaff, and found BioKleen Dishwashing Liquid: 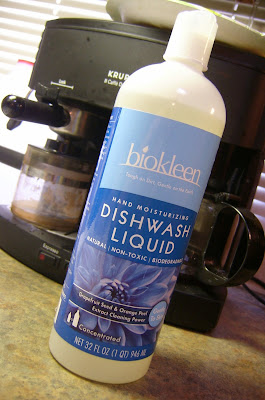 This stuff is great if you have sensitive skin! I have been using it since the last week of October. My hands are not all itchy, and don’t have the ugly peely looking cuticles I usually get when I am the one doing the dishes. See: 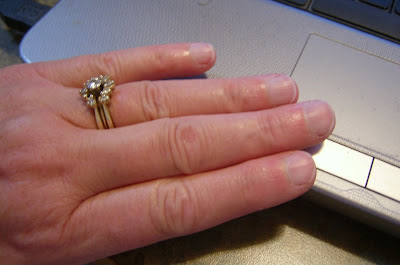 The bottle says Hand Moisturizing, Natural, Non-toxic, Biodegradable. It has Grapefruit Seed and Orange Peel Extract, and is Gentle to the Skin. It was not cheap, but a 32 oz bottle lasts a pretty long time. We just opened our third bottle and have been using it since the last week of October. Anyway, consider this a public service announcement. If you have a problem with dry itchy skin on your hands, get some of this stuff. It works great! (and NO, I was NOT paid to review this product. I just really like it.)