A while back I found Road’s End Organics Shiitake Mushroom Gravy Mix. It is gluten free, vegan and organic. That’s a pretty good triple header there, but it is also very good tasting. Made according to the directions on the back of the package, it makes a thick gravy that goes pretty good with mashed potatoes or rice.

Tonight I made goulash using a cubed steak that I had in the freezer instead of using ground beef. It tasted very much like the cubed steak and gravy that I used to make before I started eating gluten free. I used more water than the package called for because I wanted a thinner sauce. It was still good. 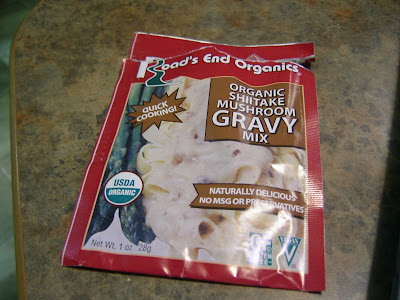 Cook the steak and onions in the olive in a large skillet. Add salt and pepper to taste. Sprinkle in the gravy mix, add the water, and stir. Cook, stirring occasionally, until thickened. Serve over rice, noodles, or mashed potatoes. If you have some fresh or canned mushrooms, they would be a good addition.

We had this with steamed brussells sprouts and rice. Yummy. I’m going to order some more of this stuff.