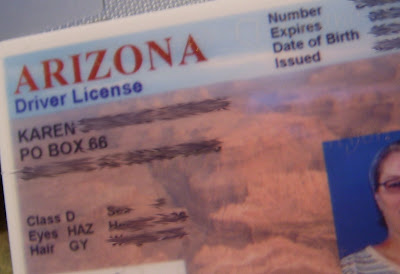 When I turned 16, I wanted nothing more than to get my drivers license. My father, however, was of the opinion that girls did not NEED a drivers license, that they could go everywhere they needed to go with their parents, their brothers, or their boyfriends. He steadfastly refused to take me to get my license.

Until it occurred to him that he could also take my brother, who is a year younger than me, at the same time. At that time in Georgia, if your parent was with you when you went to get your drivers license, you did not have to show your birth certificate. You parent told the officials how old you were, and they took them at their word.

So, on that day in 1968, my father told them I was born in 1951, so he could tell them my brother was born in 1952. And ever since then, my date of birth has been incorrect on my drivers license. It has never been a problem. Until yesterday.

Yesterday FabGrandpa and I went to the Arizona DMV to get Arizona drivers licenses. His was coming up for renewal in March. Since we are not planning to go to Georgia until November, it would have been a problem for him. He is required to have a valid drivers license for his summer job. An expired Georgia license wouldn’t work. And, because we also got a post office box in Arizona last week, I decided to go ahead and get my Arizona license, too.

When it was my turn, I appoached the desk, and gave the clerk my two forms of ID, which consisted of my Georgia license and my brand new US Passport card. And the dates of birth on them did not match! I went through the whole story of how my father lied on that day in history. The clerks conferred amongst themselves. They called the supervisor. They called The Boss. All of this was making me really uncomfortable. And they finally told me I could have my Arizona drivers license, but that I really need to bring in my birth certificate next time I am in town. You know, the birth certificate that the Passport office said was not a valid one? Thanks, Dad, for all the fun.