I was restless today, after having done little but sit or sleep for the past week. We had both been sick again, just a general “blah” feeling and no energy. Our trip to Parker yesterday included a visit to the pharmacist at CVS, who suggested some Claritin and a cool mist vaporizer. She explained that even though we had spent the spring, summer, and fall here in Arizona, we were still in a very dry climate, with winter being the driest. Some allergies are aggravted by the dry climate.

We brought the vaporizer home and plugged it in. It brought the humidity in the trailer up from around 26% to 51%, and we are both feeling much better. That lady really knew what she was talking about.

So, in the afternoon, I set out for a walk in the desert. Like most people, I always thought there was not much life going on in the desert. But I found lots of animal tracks, and other evidence that they had been there. The plants are turning green quickly from the little bit of rain we got this week.

I walked out about a 1/4 of a mile off the road. This picture was looking to the northeast of the campground: 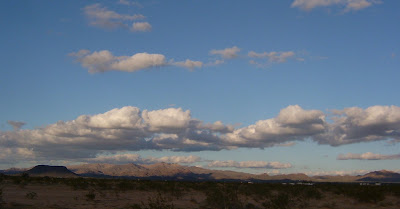 This one is looking west: 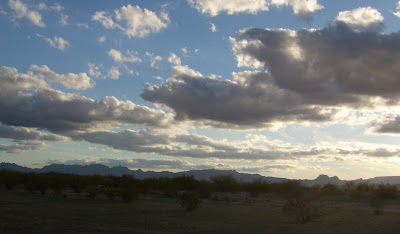 I walked back over to the dirt road that goes past the campground, and walked about 1/4 of a mile to the south. There was a smaller, narrower dirt road that went off to the west, so I took that one for a way: 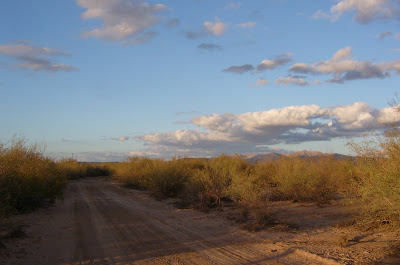 There were lots of animal tracks here, probably cows and javelinas. I found some seashells in a wash area, and a pretty rock, and brought them home to examine more closely. 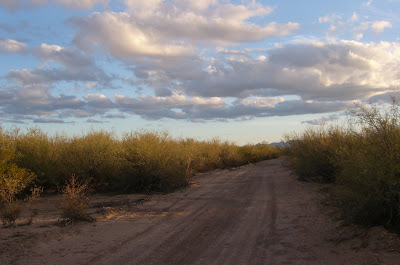 It was getting late when I got home, so I made some dinner. Actually, I heated up leftover eggplant parmesean. After dinner, I went outside again, to get some shots of the sunset. I never get tired of seeing it: 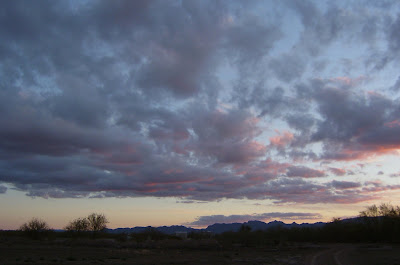 It was a grand end to a great day: 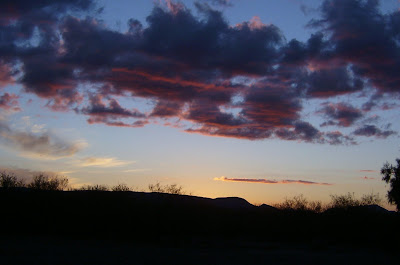