We have a 1997 Ford F250 diesel pick up truck. It has been a great truck. In December of 2006, we got one of those superchips for it, that revs it up and gives it more power. Ever since then FabGrandpa has wanted to get a custom exhaust pipe put in. The existing exhaust pipe was flat, and did not allow the engine to “breathe” as well as it should, so it could overheat when towing a large travel trailer over the mountains. 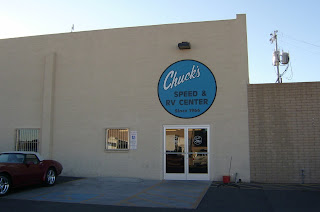 Yesterday, we went to Chuck’s Speed and RV in Phoenix to get this done. This involved me getting up early on my day off. We got there at about 8:30 a.m. FabGrandpa had made an appointment with them last week to get this work done, so they were expecting us. They took the truck right in and started working on it. 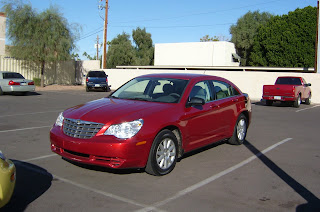 We called Enterprise and got a rental car for the day so we wouldn’t have to just hang around waiting. They came and picked us up at Chuck’s and took us to their office to get the car. It was a Chrysler Sebring, not the smallest car out there, but after riding in a Ford F250 for years, I felt like I was riding in an enclosed skateboard. It was a nice enough, but close to the ground. 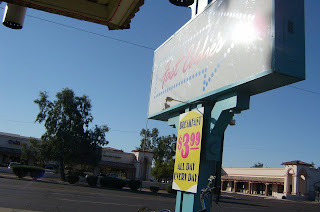 The nice people at Enterprise told us about Fast Eddie’s Diner. They have been in business for a long time, and have a lot of regular customers. Their breakfast is $3.99 all day every day. It was pretty good, and had a great counter. I just wish they weren’t so far from where we are staying so we could go there every morning. It was that good! 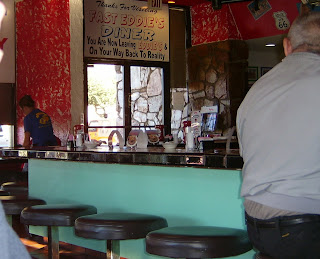 We went back home after breakfast. I washed my hair and FabGrandpa took a nap. I had an appointment to get the ultrasound on my arm at 2:00 p.m. The lab is only two miles away. We got there with plenty of time to spare. I forgot to take my camera with me to get a shot of the ultrasound, dang it! To see what it looked like, click here: Ultrasound of lipoma in arm That’s not my arm but it looks just like mine. The mass was sort of oval, shaped like an egg, definitely there. She did one scan of my right arm for comparison and there was no egg shaped thing in that one. I guess I am eating too many eggs, as I am growing one in my arm now.

About 4:00 p.m. the guy called from Chuck’s to let us know they were finished with our truck, so we went back over there to pick it up. Here is what the new pipe looks like: 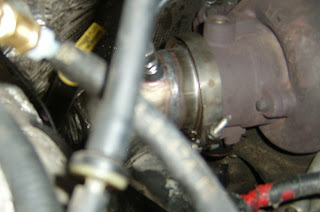 And FabGrandpa got these two really cool gauges: 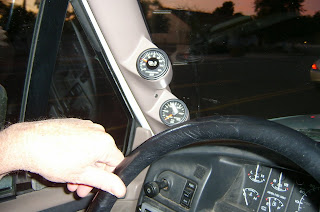 The top one measures the temperature of the air coming out of the new exhaust pipe. The second one measures “turbo boost”. He is in “guy heaven”, he is such a gauge kind of guy. They even light up at night.